How best to stir a steel furnace, and beat corrosion 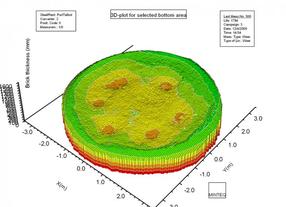 Laser scans of the steelmaking vessel acquired during production identified a weak link near the bottom blowing elements. Remedying this will improve efficiency and quality. 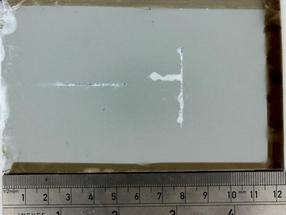 A steel panel with the new anti-corrosion treatment, after being exposed to hundreds of hours of salt spray, and showing virtually no signs of corrosion

Two steel research projects led by Swansea University -- a better way to tackle corrosion, and more efficient use of furnaces -- are on a list of only eleven awards, across all subjects and the whole UK, by the Royal Society, one of the world's most prestigious scientific organisations.

The awards are to help turn research into real products; as the Royal Society puts it, "from labs to riches". The idea is to help researchers develop a proven novel concept or prototype into products that are almost ready for the market.

The awards underline Swansea's status as the home of innovation for the UK steel industry. The City Deal for Swansea Bay, recently announced on the Swansea University campus by Prime Minister Theresa May, includes funding for a UK steel science centre.

Swansea's winning projects in the Royal Society Awards are:

The entries were co-ordinated by Dr Adrian Walters of the College of Engineering.

The awards are the latest accolades for Swansea's steel researchers. From greener buildings that generate their own energy, to lighter steel for a new generation of cars, they are using steel to develop tomorrow's technologies. Situated in the heartland of British steel, only a few miles from the Port Talbot plant, Swansea University's record of innovation is built on strong links with the industry.

"To win two Royal Society awards for our steel research is a magnificent achievement. It is further proof that Swansea is the natural home for innovation in the UK steel industry.

Innovation is the bedrock of the 21st century steel industry. Ever since Swansea University was founded to meet the needs of the metal industry, it has been at the forefront of innovation. That remains the case today, as these awards illustrate.

We have a wealth of expertise and talent, and a rich network of partnerships with the industry. All this is being mobilised to help the UK become a world leader in steel."

"These awards support some of the very best, innovative researchers in UK universities to increase their chances of entrepreneurial success. The process of translating research from academia into commercially viable products can be challenging and we are proud to help bridge the journey for researchers."

Describing the follow-up to the work on steel stirring, Dr Cameron Pleydell-Pearce of Swansea University said:

"We have now devised a new product which is expected to make a significant improvement to steelmaking efficiency and product quality. The potential market for this product alone is in excess of €12M Pa, though it is anticipated that this technology could be rolled out to a wider range of potential high temperature stirring applications."

"This is a significant breakthrough, showing a smarter and safer way of reducing corrosion. The new product is environmentally sound, economical and outperforms the market leader in laboratory tests. It illustrates that Swansea, with its close links between research and industry, remains at the heart of innovation in steel"

Dr Patrick Dodds of Tata Steel and the College of Engineering at Swansea University, added:

"The system has been shown to prevent the onset of corrosion for over 24 hours compared to less than 2 hours for the current market leader. We have also been able to demonstrate that the rate of corrosion can be slowed down significantly once it has started. This is by far the best result seen in 15 years of research on this topic."