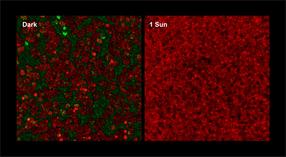 EPFL scientists show how light affects perovskite film formation in solar cells, which is a critical factor in using them for cost-effective and energy-efficient photovoltaics.

Perovskites are materials of immense interest in solar energy technology lately, as they promise to bring down the cost of solar cells to very low levels. Their efficiency heavily depends on our ability to control their deposition into films, but the factors that influence the synthesis of perovskites are not well understood. EPFL scientists have now shown that, in the two most common methods used today, light can greatly accelerate the formation of perovskite films and control the morphology of their crystals, thus influencing the efficiency of the resulting solar cell. The breakthrough study is published in Nature.

The research was carried out by the lab of Michael Grätzel at EPFL. Grätzel is world-renowned for inventing the first dye-sensitized solar cells (Grätzel cells) that revolutionized solar-energy science.

In this paper, PhD student Amita Ummadisingu and her colleagues at Grätzel's lab used confocal laser scanning fluorescence microscopy and scanning electron microscopy to examine how direct light affects the crystal formation when depositing perovskites in layers, as is usually done to build a solar cell. The goal is to ensure homogeneity across the perovskite film, as this is linked to superior photovoltaic performance.

So far, efforts have been focused on improving perovskite solar-cell efficiency by optimizing their architecture and the fabrication processes. But fundamental aspects of perovskite formation, such as the mechanism or the factors controlling the reaction are poorly understood, which results in batch-to-batch inconsistencies in performance.

However, understanding the light effect can help reproducibility and scaling-up of perovskite photovoltaics to commercial production. Because of this, the EPFL scientists studied the effect of light on the two most common methods used today for perovskite film deposition.

The first method is called "sequential deposition", and it involves depositing lead iodide onto a titanium dioxide scaffold, and then dipping them together in a methylammonium iodide solution to make the final methylammonium lead iodide perovskite. The second approach is the "anti-solvent method". Here, a perovskite precursor solution is coated uniformly onto a spinning flat base to create a thin layer. An anti-solvent is then dripped on it and, finally, the whole sample is heated to form the perovskite.

Using both the microscopy techniques during the sequential deposition method, the scientists found that when light is present, it significantly accelerates the overall formation of the perovskite. The effect is enhanced when light intensity is increased to solar levels.

The morphological differences in the film are not the result of heating from the light; rather they are the product of a quantum effect: the lead iodide film crystallizes as the first step in perovskite formation, and it forms surface traps. These traps capture photo-generated holes, which lowers the surface tension. As a result, more lead iodide crystals grow in the film, ultimately producing more perovskite crystals.

On the other hand, the researchers found that the anti-solvent method actually benefits more from the absence of light, and it gives best results in the dark.

The study shows that controlling the light present during fabrication can help achieve the best performance from perovskite solar cells. "Surprisingly and strikingly we find that light strongly affects the rate of formation and the morphology of perovskites in conventional methods used where no light effects have been remarked before," says Michael Grätzel.

"Light is a major factor in the main deposition methods and for many perovskite compositions," adds Amita Ummadisingu. "So awareness and control of the light effect is crucial when fabricating state-of-the-art perovskite devices, and should always be considered when preparing perovskite films for opto-electronic applications such as solar cells, LEDs, etc."