A recipe for concrete that can withstand road salt deterioration 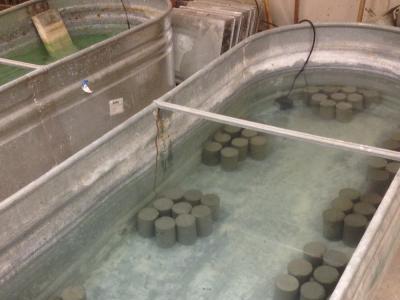 In the lab of Drexel University assistant professor Yaghoob Farnam, researchers are using recycled materials, like slag, silica fume and fly ash to make concrete that can withstand the chemical deterioration caused by concrete's reaction with road salt.

Road salt, used in copious helpings each winter to protect them from ice and preserve safe driving conditions, is slowly degrading the concrete they're made of. Engineers have known for some time that calcium chloride salt, commonly used as deicer, reacts with the calcium hydroxide in concrete to form a chemical byproduct that causes roadways to crumble. A civil engineer from Drexel University is working on a new recipe for concrete, using cast-off products from furnaces, that can hold its own against the forces of chemical erosion.

More than 900,000 tons of deicing salt is used each winter in Pennsylvania alone. While winters in the Northeast put pressure on departments of transportation to keep roads clear and deicer is an effective part of that process, it also contributes to the thousands of miles of roads that need to be patched and repaired each year.

Yaghoob Farnam, PhD , an assistant professor in Drexel's College of Engineering and director of the Advanced and Sustainable Infrastructure Materials Research Group, is looking for a solution to this problem in the recipe for concrete. Farnam created a method for using fly ash, slag and silica fume -- leftovers from coal furnaces and the smelting process -- in a new concrete mix that is more durable because it doesn't react with road salt.

"Many departments of transportation have reduced the amount of calcium chloride they use to melt ice and snow, even though it is very efficient at doing so -- because it has also been found to be very destructive," Farnam said. "This research proves that by using alternate cementitious materials to make concrete, they can avoid the destructive chemical reaction and continue to use calcium chloride."

The goal of Farnam's work is to produce a concrete mix as strong as the ones currently used to build roads, that contains less calcium hydroxide -- the ingredient that reacts with road salt to form a compound called calcium oxychloride. This chemical tends to expand when it is formed, and when that reaction happens in the pores of cement it can cause degradation and cracking. Farnam's research led him to the conclusion that these "supplementary cement materials" could be substituted into the mix with a better result when they come in contact with calcium chloride deicing salt.

"There is a great push to use these power industry byproducts because they take up space and some of them can be harmful to the environment," Farnam said. "We believed that portions of the byproducts such as fly ash, slag and silica fume could be used to make concrete that is both durable -- and cheaper, because it uses recycled materials."

To test his theory, Farman's lab created cement samples using varying amounts of fly ash, silica fume and slag and compared them to samples of "ordinary Portland cement" -- the most common type used in roads. His findings confirmed his hypothesis, namely that the samples containing more cement substitute materials did not produce as much calcium oxychloride.

An examination of the ordinary Portland cement samples, via acoustic emissions, x-rays and microscopy, revealed damage after just eight days of exposure due to the formation of calcium oxychloride while samples with proper amount of fly ash, silica fume and slag did not show damage during the testing period.

"An additional concern is that calcium oxychloride can form even if the concrete is not undergoing a freeze-thaw cycle. It is a chemical reaction that can happen at room temperature, so it can take place when the roads are pre-salted even if ice doesn't form. And as the salts remain on the surface after a snowstorm the reaction will continue to degrade the road, so it is vitally important to minimize this reaction in order to preserve the infrastructure," Farnam said.

Farnam's lab will continue to search for ways to improve the materials we use in our infrastructure. They are currently pursuing a method for creating a protective layer on the surface of concrete by using bacteria that can prevent calcium oxychloride formation.