29-May-2017 - Daegu Gyeongbuk Institute of Science and Technology (DGIST)

Photocatalyst speeds up the conversion of CO2

A schematic diagram showing the mechanism of the conversion of carbon dioxide into methane using the reduced titanium dioxide developed by the team. 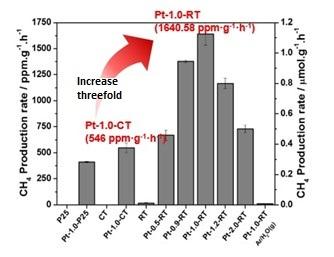 Caption A graph comparing methane production efficiencies between the existing photocatalyst and new photocatalyst developed by the team.

The research team has applied a simple magnesiothermic reduction method to synthesize oxygen-deficient titanium dioxide by removing oxygen atoms on the surface of titanium dioxide, which turns out to be a high-efficient photocatalyst that can effectively convert carbon dioxide into methane.

The research team mentions that the newly developed photocatalyst illustrates controlled band gap by removing oxygen atoms on the surface of titanium dioxide through strong reduction of magnesium and hydrogen. This band gap control improves the light absorption and optimizes the efficient charge separation. As a result, the photocatalyst is found to increase conversion rate of carbon dioxide into methane up to threefold compared to the existing photocatalyst.

Professor Su-Il In stated "The key of this study is that we have improved the efficiency of the existing titanium dioxide photocatalyst by using a relatively simple magnesiothermic reduction method." He added "By understanding the conversion mechanism of carbon dioxide into hydrocarbon, we expect to apply it to use carbon dioxide as resource in abatement technologies."