Chemical "programming" to induce Nafion foil to fold itself 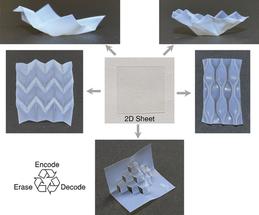 Plastic with a thousand faces: A single piece of Nafion foil makes it possible to produce a broad palette of complex 3D structures. Researchers describe how they use simple chemical "programming" to induce the foil to fold itself using origami and kirigami principles. These folds can be repeatedly "erased" and the foil can be "reprogrammed".

We have all seen the cranes and lotus flowers produced from a sheet of paper by practiced hands. Origami is the traditional Japanese art of folding that transforms paper into complex three-dimensional structures without the use of adhesive. Kirigami is a related technique in which the paper is strategically cut before folding. Both of these techniques have found application in modern technology.

Adebola Oyefusi and Jian Chen from the University of Wisconsin - Milwaukee (USA) have now presented a new variation on this technique. They chemically "programmed" Nafion foil so that heat causes it to fold itself into complex three-dimensional forms. The foil can also be "deprogrammed". Nafion is a polymer that can "remember" its shape, so that a stretched piece of foil will return to its initial form upon heating.

The secret to this trick is this: Nafion can be protonated in an acidic environment and deprotonated in a basic one. When protonated, stretched Nafion shrinks at temperatures over 100 °C, when deprotonated it must be heated over 260 °C. As long as the temperature remains within this range, only regions of the Nafion that are protonated will shrink. The deprotonated Nafion is "locked" and does not shrink. The researchers make use of this by programing the information required for folding in the form of a pattern of "unlocked" regions in a stretched piece of Nafion foil that has been "locked" with potassium hydroxide. The pattern is „painted" onto the sheet using hydrochloric acid. When heated above 100 °C, the sheet shrinks in the region of the lines and folds itself along these "creases".

The scientists made some simple and some complex structures, such as a bird and a zigzag rip pattern common in technical practice; solar panels for satellites, for example, are transported in a folded way and can be spread in just one movement. Simple acid-base chemistry and heating "erased" the structures and the nafion sheets could be coded and folded in a new fashion.

The 3D structures made from Nafion can be used as a master mold. This can be used to cast a secondary mold from plastics like polydimethylsiloxane, which can then be used to make molded components from a wide variety of materials, including polymers, ceramics, or metal. The reprogrammable master molds save time, money, and waste because they can be directly reused without a costly recycling process.