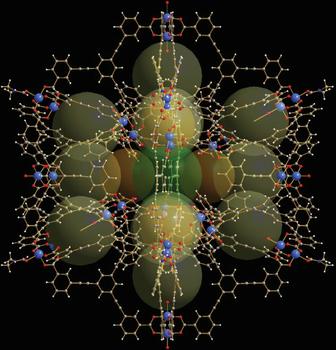 This is a diagram showing the molecular cage structure.

Scientists from Trinity College Dublin and AMBER, the Science Foundation Ireland-funded materials science research centre hosted in Trinity College Dublin, have created 'molecular cages' that can maximise the efficiency of converting molecules in chemical reactions, and that may in future also be used as sensors and drug-delivery agents. The cages can be packed with different molecules, many of which have a specific task or functionality. Incredibly, a teaspoon of powder containing these cages provides a greater internal surface area to boost reactivity and storage capacity than would be provided by an entire football field (4000 m2/g).

This enormous intrinsic surface area relative to the weight of the structure in combination with the solubility offers great promise for energy conversion, while the structure blueprint (hollow, with sub-cages) allows different molecules to be discretely contained within. This latter feature is key in increasing the potential uses for these 'metal-organic-organic polyhedra' (MOP), because it means materials can be packed so as to react only when specific conditions present themselves.

One such example is in bio-sensing and drug-delivery, with a biological cue required to kick-start a chemical reaction. For example, a drug could be encapsulated in one of these MOP in the knowledge that it would only be released at the specific target site, where a specific biological molecule would trigger its release.

The researchers behind the breakthrough also hope to develop light-active porous, metal-organic materials for use in green energy. The dream would be to create a molecule that could simply use light to convert energy - essentially replicating the way plants produce energy via photosynthesis.

Professor in Chemistry at Trinity College Dublin, and Investigator in AMBER, Wolfgang Schmitt, led the research. He said: "We have essentially created a molecular 'flask' or better 'sponge' that can hold different molecules until a specific set of conditions spark them into life."

"Hollow cage-type molecular structures have attracted a lot of scientific attention because of these features, but as the number of potential applications has grown and the target systems and environments become more complex, progress has been hampered by the lack of structures with sufficiently large inner cavities and surface areas."

"The MOP we have just created is among the largest ever made, comprising a number of internal sub-cages, providing numerous different binding sites. The nano-sized compartments can potentially change the reactivity and properties of molecules that are encapsulated within the confined inner spaces and, as such, these cages can be used to promote distinct chemical reactions. Thus, these molecules have the potential to mimic biological enzymes."