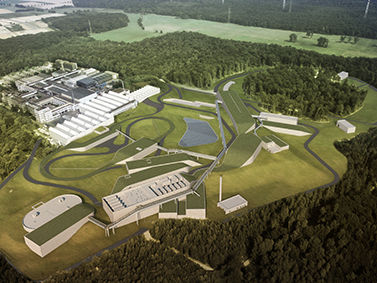 Central predictions by GSI scientists on the formation of heavy elements such as gold and platinum in the universe have now been observed astrophysically. For the first time gravitational waves of merging neutron stars were detected. This also puts further focus on the future accelerator facility FAIR, as conditions for further research on neutron stars can be simulated there.

On October 16 a team of scientists, including members from the LIGO and Virgo collaborations and several astronomical groups, announced the detection of both gravitational and electromagnetic waves, originating from the merger of two neutron stars. These mergers have been speculated as the yet unknown production site of heavy elements including Gold, Platinum and Uranium in the Universe. In 2010 an international collaboration led by Gabriel Martínez-Pinedo (GSI Helmholtzzentrum für Schwerionenforschung and Technische Universität Darmstadt) and Brian Metzger (Columbia University) pointed out that the heavy element synthesis in the merger process leads to a unique electromagnetic wave emission pattern.

The electromagnetic signal observed from the merging neutron stars indeed shows this pattern and confirms that the site for the heavy element production in the Universe is finally found, solving one of the 11 most important question in physics, as named by the US National Academies in 2003. This breakthrough puts even further focus on the Facility for Antiproton and Iron Research (FAIR), which is currently being built in Darmstadt and at which the short-lived and very neutron-rich nuclei which drive the observed electronmagnetic signal will be produced and studied for the first time.

60 years ago the main processes responsible for the production of elements in the Cosmos were outlined. Since then, it has been possible to identify the astrophysical sites for most of those processes except for the so called r process that is responsible for producing half of the elements heavier than Iron. It requires an environment with extreme neutron densities, permitting neutron captures on nuclei to proceed much faster than beta-decays. „Identifying the site of the astrophysical origin of elements heavier than Iron is viewed as one of the Millenium problems in physics" says Friedrich-Karl Thielemann, Professor at the University of Basel and now also member of the GSI theory group, who in 1999 performed the first nucleosynthesis study showing that the r-process can operate in material ejected during the coalescence of two merging neutron stars.

Almost simultaneously, it was suggested that the radioactive decay of the freshly synthesized nuclei will trigger an electromagnetic transient. The first realistic modeling of the electromagnetic signal was performed in 2010 by an international team led by Gabriel Martinez-Pinedo and Brian Metzger, including Almudena Arcones, GSI and Technische Universität Darmstadt, and key experimental guidance from GSI scientists Aleksandra Kelic-Heil and Karl-Heinz Schmidt. They predicted that such an event will be a thousand times brighter than a nova and will reach its maximum on timescales of a day. It was named "kilonova". This picture has been confirmed by the recent observation of an optical/infrared counterpart associated with GW170817. „This represents a unique case in nuclear astrophysics, as usually astronomers observe a new phenomenon which is much later explained by theorists. In the present case we anticipated a novel astronomical signal without the benefit of observational guidance much before it was confirmed by observations“, says Gabriel Martinez-Pinedo.

Several signatures point to the radioactive decay of r-process nuclei to explain the observations. The time dependence of the signal corresponds to what is expected assuming that the energy is produced from the decay of a large ensemble of radioactive nuclei. Furthermore, the evolution in color of the signal shows that a broad range of r-process nuclei has been produced from the lighter elements with Z ~ 50 to the heavier with Z ~ 82. It has been estimated that GW170817 produced around 0.06 solar masses of r-process ejecta with over ten times Earth's mass in Gold and Uranium.

The LIGO and Virgo collaborations predict that once the gravitational wave detectors reach the design sensitivity in 2019 we may be able to detect neutron star mergers as frequently as once per week. This will represent a complete change of paradigm in our understanding of heavy element nucleosynthesis demanding high precision nuclear data, in particular of heavy neutron-rich nuclei to reproduce the observations.

It is very fortunate that with FAIR the facility needed to provide these data is already under construction in Darmstadt. First results are expected from experiments performed in the FAIR phase-0 starting 2018. Once FAIR reaches its complete potential in 2025, it will offer unique physics opportunities to determine the properties of heavy neutron-rich nuclei of relevance to r-process nucleosynthesis. In the meantime, it is the aim of the GSI theory group to identify key nuclear information to fully characterize the variety of electromagnetic transients expected from neutron star mergers.