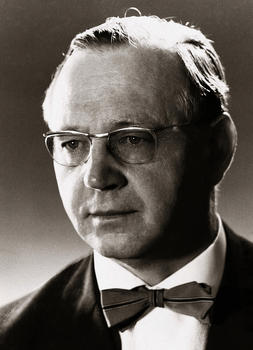 In 1953 the Bayer chemist Dr. Hermann Schnell, working at the Krefeld-Uerdingen site, discovered a chemical reaction that could be used to produce a new plastic.

Dr. Hermann Schnell was posthumously awarded one of the highest honors in the plastics industry when he was inducted into the Plastics Hall of Fame this year. The Plastics Academy Hall of Fame was founded in 1972 to honor those who have made major contributions to the growth and success of the plastics industry. In addition to Nobel Prize winners - this year, for example, Dr. Hermann Staudinger and Dr. Alan MacDiarmid - and founders of leading chemical companies, it also recognizes inventors of plastics that are now in everyday use. One such inventor is Bayer scientist Dr. Schnell, who invented the polycarbonate Makrolon® in 1953. The unique properties of this high-tech material are its light weight and resistance to breaking and splintering. True to its motto, "Makrolon® protects and makes life easier" when used for items such as cycle and motorcycle helmets and spectacle lenses. It also ensures safe storage in optical data media and helps reduce vehicles' CO2 emissions when used for panorama roofs and sunroofs. Schnell succeeded in synthesizing Makrolon® at virtually his first attempt. Soon after moving from Bayer headquarters in Leverkusen to the Wissenschaftliches Hauptlaboratorium (Main Science Lab) at the Uerdingen site, he discovered a chemical reaction that could be used to produce a plastic. At first, however, even his colleagues in Uerdingen found the success of Schnell's experiments hard to believe. Schnell overcame all their reservations with great determination and perseverance. "The prejudice that carbonates such as Makrolon® are temperature-sensitive and break down easily caused me many problems when developing polycarbonates," Schnell once revealed. "It is not enough to invent something. You have to fight to get your invention accepted in the face of all subsequent obstacles," he added. Bayer patented Makrolon® the year it was invented. Dr. Schnell died in 1999.