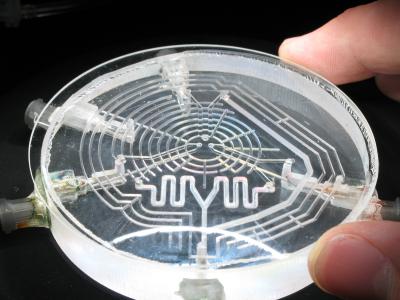 This is the NIST microfluidic palette. The mixing area is the pin-sized chamber bordered by three holes in the center of the top layer.

The masterpieces that spring from the talents of Rembrandt, Van Gogh and other artists often begin with the creation of a gradient of colors on a palette. In a similar manner, researchers at the National Institute of Standards and Technology (NIST) have created an innovative device called the "microfluidic palette" to produce multiple, steady-state chemical gradients - gradual changes in concentration across an area - in a miniature chamber about the diameter of a pinhead. The tool can be used to study the complex biological mechanisms in cells responsible for cancer metastasis, wound healing, biofilm formation and other fluid-related processes.

The advantage of the NIST system, as described in a new paper, is that the gradients are generated by diffusion - the gentle movement of matter from one point to another by random molecular motion. Microfluidic systems usually mix fluids more actively, by pumps and the circulation of currents. Diffusion gradients allow cells being studied to remain in the microchamber without the chance of their being swept away. Diffusion also permits chemical molecules to move in and out of the cells naturally and eliminates the risk of shear stresses, commonly produced by currents, which could cause the cells to rupture or behave abnormally.

The NIST microfluidic palette manages this with a clever plumbing trick. The key element of the palette is the microchamber, a small disk-shaped area only 1.5 millimeters (0.06 inch) across etched into the center of a glass wafer. Tiny holes at its circumference - three in the prototype, but it could be more - allow various mixtures to flow into the chamber. Beneath the chamber, each access port connects to the long tail of a Y-shaped channel etched into a second layer. These channels deliver test chemicals to the chamber. Fluid flow in and out of the short arms of each Y at constant pressure assures a constant stream of fresh chemicals. Because the pressure in the chamber is balanced by filling it previously with a buffer solution, the test chemicals that migrate from the channels into the chamber do so almost entirely by diffusion. Therefore, as long as a constant flow of fluid is maintained through the Y's, the gradients in the chamber can be maintained virtually indefinitely.

To demonstrate how the microfluidic palette works, the NIST researchers inject dyes of the three primary colors - red, yellow and blue - separately into the three inlets of the system. For each dye, an independent gradient forms that remains constant as long as flow rate into the system does not change. Overlapping the three gradients results in a blend of dye concentrations in which the combination of colors at one location is distinctly different from any other location.

Similarly, if three separate drugs were injected into the palette where the microchamber contained a culture of cells, individual cells at different locations in the chamber would be exposed to different combinations of the drugs. In a single experiment, one could easily study the effects of a wide range of mixed drug concentrations on the same cell type.

Another potential application of the microfluidic palette is the study of chemotaxis, the movement of cells along a chemical gradient, a biological phenomenon that plays a role in the spread of cancer (metastasis), wound healing, infection and carbon cycling in the ocean.