How do very small particles behave at very high temperatures? 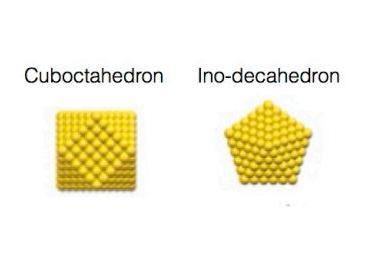 The two alternative architectures of the gold nanoclusters containing 561 atoms.

A Swansea University nanomaterials expert has been looking at how small gold particles survive when subjected to very high temperatures.

The research is important to the engineering sector for some potential applications of nanotechnology, for example in catalysis and aerospace, where particles of only nanometre dimensions are subjected to very high temperatures.

The results of the study, which was a 3-way collaboration between Birmingham, Swansea and Genoa University's, was published in the journal Nature Communications. The study showed that gold nanoparticles of precisely selected size (561 atoms ±14) are remarkably robust against diffusion and aggregation but their internal atomic arrangements do change.

The researchers used an ultrastable, variable-temperature stage in an aberration-corrected scanning transmission electron microscope to subject an array of size-selected gold nanoparticles (or clusters) to temperatures as high as 500 °C while imaging them with atomic resolution. The particles were deposited from a nanoparticle source onto thin films of silicon nitride or carbon.

The two alternative architectures of the gold nanoclusters containing 561 atoms

The experiments showed that binding of the gold nanoparticles to the surface, at point defects, proved sufficiently strong to fix them, even at the top of the temperature range. But the atomic structures of the clusters fluctuated under the heat treatment, switching back and forth between two main atom-configurations ("isomers"): these were a face-centred cubic structure, similar to a small piece of bulk gold, and a decahedral arrangement with a symmetry forbidden in an extended crystal. The researchers were even able to measure the tiny difference in energy (only 40 meV) between these two different atomic architectures.

Professor Richard Palmer, head of the Nanomaterials Lab in Swansea University's College of Engineering, commented: "These advanced experiments have allowed us to make a new measurement for nanoparticles deposited on a surface - the difference in energy between two competing atomic arrangements. It's something that the people who use computers to calculate the properties of nanomaterials are particularly excited about, a kind of reference point if you like. And the images show that our little nanoparticles are really rather tough creatures, which bodes rather well for their applications in future industrial manufacturing."

The Swansea Lab's research is focused on scale-up of the production of such nanoparticles by 10 million times to the level of grams, and beyond. As Prof Palmer says: "We need very small things in very large numbers to realise the true potential of nanotechnology ".