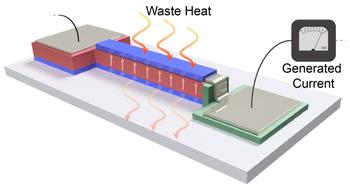 An illustration of how the thin-film device system converts waste heat to energy.

Nearly 70 percent of the energy produced in the United States each year is wasted as heat. Much of that heat is less than 100 degrees Celsius and emanates from things like computers, cars or large industrial processes. Engineers at the University of California, Berkeley, have developed a thin-film system that can be applied to sources of waste heat like these to produce energy at levels unprecedented for this kind of technology.

The new results suggest that this nanoscopic thin-film technology might be particularly attractive for installing on and harvesting waste heat from high-speed electronics but could have a large scope of applications. For fluctuating heat sources, the study reports that the thin film can turn waste heat into useable energy with higher energy density, power density and efficiency levels than other forms of pyroelectric energy conversion.

"We know we need new energy sources, but we also need to do better at utilizing the energy we already have," said senior author Lane Martin, associate professor of materials science and engineering. "These thin films can help us squeeze more energy than we do today out of every source of energy."

Pyroelectric behavior has been known for a long time, but accurately measuring the properties of thin-film versions of pyroelectric systems has remained a challenge. A significant contribution of the new study is to demystify that process and improve the understanding of pyroelectric physics.

Martin's research team synthesized thin-film versions of materials just 50-100 nanometers thick and then, together with the group of Chris Dames, associate professor of mechanical engineering at Berkeley, fabricated and tested the pyroelectric-device structures based on these films. These structures allow the engineers to simultaneously measure the temperature and electrical currents created, and source heat to test the device's power generation capabilities - all on a film that's less than 100 nanometers thick.

"By creating a thin-film device, we can get the heat into and out of this system quickly, allowing us to access pyroelectric power at unprecedented levels for heat sources that fluctuate over time," Martin said. "All we're doing is sourcing heat and applying electric fields to this system, and we can extract energy."

The next steps in this line of research will be to better optimize the thin-film materials to specific waste heat streams and temperatures.

"Part of what we're trying to do is create a protocol that allows us to push the extremes of pyroelectric materials so that you can give me a waste-heat stream and I can get you a material optimized to address your problems," Martin said.