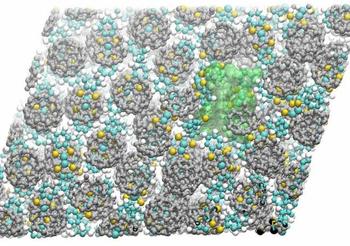 Grow Monsters. Expandable water toys. Whatever you call them, they're plastic-like figurines that swell when placed in water.

The advancement could form the backbone of new light-powered actuators, oscillators and other microscopic electronic components useful in the development of artificial muscles and other soft robotic systems.

The work centers on a materials science concept known as photostriction, which means turning light directly into mechanical motion, says the study's co-lead author Shenqiang Ren, a researcher at the University at Buffalo's RENEW Institute, which works to solve complex environmental problems.

"We're using light -- anything from sunlight to a simple laser -- to cause the two-dimensional nanosheet to expand at an incredibly fast rate," he says.

How fast? Sub-milliseconds. The process is aided by the photostrictive effect, which essentially bypasses the need to create electricity to move something, says Ren, PhD, a professor in the Department of Mechanical and Aerospace Engineering in the UB School of Engineering and Applied Sciences.

The nanosheet -- made of the molecular charge-transfer compound DBTTF and buckyball molecules -- can expand up to 5.7 percent of its original size, according to the study.

While that may not sound like much, consider this: a 200-pound man that expands 5.7 percent would need to add 11.4 pounds in less than a second to keep pace with the light-triggered nanosheet.

Expandable water toys grow much more than that, but they do not revert to their original size. By contrast, the nanosheet does, making it potentially very useful as a light-induced actuator in artificial muscles, which has applications in everything from medical devices to industrial robotics.