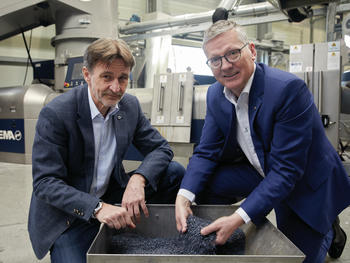 The European Patent Office (EPO) announces that Austrian inventors and businessmen Klaus Feichtinger and Manfred Hackl have been nominated for the European Inventor Award 2019 as finalists in the category "Industry", for developing technology that efficiently recycles plastic waste into high-quality pellets, which can in turn be made into new products.

Their technology is commercialised through a company that is part of a group where Hackl and Feichtinger ran the business together for a number of years. The company has machines in use in 108 countries and is a global leader in developing and manufacturing plastics recycling systems and technologies.

"Feichtinger and Hackl's technology closes the loop in plastics recycling. They have increased its efficiency and developed a better end product, which is great news for business," said EPO President António Campinos on their nomination for the European Inventor Award 2019. "And they show how innovators and innovation in industry can help to address a pressing environmental issue, and so make society greener too."

Plastic recycling has been a long-standing issue for industry as it is a far more complex task than processing materials such as glass and metals – which basically just need sorting, cleaning and melting for reuse. Each type of plastic polymer requires a specific method for reclaiming salvageable material. This is further complicated by the fact that demand for recycled plastic sharply decreases when oil prices are low, as does the price of virgin plastics (i.e. new material that does not come from recycled plastic). As a consequence, out of the 58 million tonnes of plastic waste produced in the EU every year, only 30% is recycled.

To tackle the issues presented by plastic recycling, Austrian inventors Klaus Feichtinger and Manfred Hackl are working to make the process as innovative and efficient as possible. They are doing this by developing and building state-of-the-art machines that enable industry to recycle and reuse plastic waste as a valuable resource.

These machines, sometimes the size of buses, work by moving plastic matter along conveyor belts. Material is cut, mixed, heated, dried, pre-compacted and buffered in a cutter/compactor before entering an extruder where the material is plasticised, homogenised and then cleaned. A core element in Hackl and Feichtinger's devices is their patented Counter Current technology.

Previously, material inside the cutter/compactor had been turned in the same direction as the extruder screw, which meant that there was sometimes a difference in the material flow inside the screw. Hackl and Feichtinger's Counter Current technology reverses this principle, so the material inside the cutter/compactor rotated in the opposite direction to the extruder's flow. Hackl explains that "it's a bit like taking a beaker, when you're sitting by a stream, and then filling it, either in the direction of flow, then the cup is only partly filled, or against the direction of flow - then the cup is completely full the whole time". Feichtinger goes on to say that "it turned out that the filling process was far better - the flow was more stable. Plus, we realized that the quality could be sharply improved as well," adding that "it only took me about 15 minutes to sketch out the basic idea. Detailed engineering and optimisation - as well as scaling up - took longer of course. We tried it out and found that it works."

Their invention means that the extruder can handle more material in a shorter period of time, and process plastic even at lower temperatures, resulting in more throughput and better quality. Their Counter Current technology consequently improves productivity and also enables waste from previously untapped segments. The machines can, for example, recycle heavily printed plastic films like those used to wrap consumer items.

Other key technologies in Hackl and Feichtinger's recycling process include double-vented degassing of liquid plastics, forcing melted plastics through sieves and filters, gas-based organic waste removal and thermal-physical odour minimisation. Combined, these steps mean that even more complex materials can be successfully reprocessed. The end result produces pellets that are indistinguishable from new plastics and ready for industrial reuse in a variety of products.

Completing the circular economy through innovation

The recycling of plastics is a growing sector due to increasing public awareness of the problems associated with single-use plastics, as well as growing political awareness and action being taken by authorities. These include the EU's Plastics Strategy released last year, which requires that all plastic packaging on the EU market be recyclable by 2030 - currently some 39% of the EU's plastic waste is incinerated while 31% ends up in landfills. China also announced in 2018 that it would stop accepting waste plastics shipped there from other countries, which means that national authorities and businesses will in the future need to develop their own recycling streams.

Feichtinger and Hackl have spent nearly all their professional careers dedicated to innovation in plastic recycling - together, for example, they hold 37 granted European patents for their recycling inventions. They also consider themselves to be pioneers of the circular economy: a concept aimed at minimising waste and making the most of resources, which is leading manufacturers to rethink how products are designed, used and recycled at the end of their useful lives.

The Austrian inventors and are promoting this approach not only through their technology, which enables more and more kinds of plastic waste to be recycled, but also through the reach of the company - called EREMA, a subsidiary of EREMA Group GmbH that Hackl runs as CEO and where Feichtinger, who recently stepped down as CEO, continues to contribute his know-how as a manager in the area of intellectual property and new technologies. More than 6000 of EREMA's recycling systems are now in operation around the globe, and in total their machines produce more than 14.5 million tonnes of plastic pellets every year, which the company says makes it the global market leader in the development and production of plastics recycling systems. The global plastic recycling market was worth EUR 31.7 billion in 2017 and is projected to grow around 6.5% per year to reach EUR 49.3 billion by 2024.