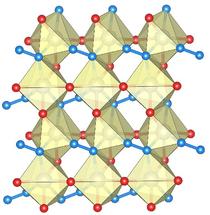 An international research group led by scientists from the University of Bayreuth has identified a previously unknown material at DESY: Rhenium nitride pernitride. Thanks to a combination of properties that were previously considered incompatible, it looks set to become highly attractive for technological applications. Indeed, it is a super-hard metallic conductor that can withstand extremely high pressures like a diamond. The production process developed in Bayreuth opens up the possibility of also synthesising other technologically interesting materials in sufficiently large quantities.

The possibility of finding a compound that was metallically conductive, super-hard, and ultra-incompressible was long considered unlikely in science. It was believed that these properties could not occur simultaneously in the same material and were therefore incompatible. But this prejudice has been soundly refuted by the research work now published, which has passed through two stages of development in Hamburg and Bayreuth: “The initial characterisation of rhenium nitride pernitride was done with a a tiny sample in a high-pressure diamond anvil cell at DESY with the help of our X-ray light source PETRA III,” says co-author Hanns-Peter Liermann, head of the Extreme Conditions Beamline (ECB) at DESY. Under a compression pressure of 40 to 90 gigapascals, corresponding to 400000 to 900000 times the atmospheric pressure, small amounts of this material were produced in a diamond anvil cell that could also be recovered at ambient pressure. Re2(N2)(N)2 is its chemical formula.

“The crystal structure that we discovered in Hamburg at the X-ray light source PETRA III surprised us very much: It contains both single nitrogen atoms and the N-N nitrogen dumbbells, in which two nitrogen atoms are strongly bound to each other. This internal structure obviously creates a very high resistance to pressure acting on the crystals from the outside: Rhenium nitride pernitride is ultra-incompressible,” says main author Maxim Bykov, postdoctoral researcher at the Bavarian Research Institute of Experimental Geochemistry & Geophysics (BGI) at the University of Bayreuth and based at DESY in Hamburg.

At BGI it was subsequently possible to produce the new material in a large-volume press at a significantly lower pressure of 33 gigapascals. “Applications of the large-volume press technology for materials synthesis are of great importance to materials science,” emphasizes co-author Tomoo Katsura from BGI. At the heart of the new process is a reaction of rhenium with ammonium azide. The rhenium nitride pernitride synthesised in this way can be investigated under ambient conditions. And the process can be used for the synthesis of other nitrides, in particular nitrides of transition metals, which could also have technologically important properties. This research therefore shows in exemplary fashion just what innovation can come out of high-pressure research in materials science.

“Although the exact scope of application for the new material is still hard to grasp, its exceptional combination of physical properties makes rhenium nitride a material that can help meet the technological challenges of the future,” explains co-author Natalia Dubrovinskaia of the Laboratory of Crystallography at the University of Bayreuth, who coordinated the work together with Leonid Dubrovinsky form BGI. “What is important about our new study, however, is not only the results as such, or the technological applications that might one day spring up,” adds Dubrovinsky. “What is particularly exciting is that the development and synthesis of the new material contradicts and clearly disproves previous views that were firmly established in materials science. We have succeeded in doing something that, according to earlier predictions, should not have been possible at all. This should stimulate and encourage further theoretical and experimental work in the field of high-pressure material synthesis.”

In addition to the University of Bayreuth and DESY, the Friedrich Alexander University in Erlangen-Nuremberg, the Ludwig Maximilian University in Munich, the University of Linköping, the materials modelling and development laboratory in Moscow, and the European Synchrotron Radiation Facility (ESRF) in Grenoble were also involved in the work.