What happens when you explode a chemical bond? 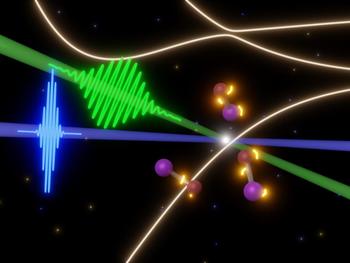 UC Berkeley scientists are probing the fleeting steps in rapid photochemical reactions with some of the shortest laser pulses possible today. In this case, a femtosecond pulse of visible light (green) triggers the breakup of iodine monobromide molecules (center), while attosecond XUV laser pulses (blue) take snapshots of the molecules. This allows them to make a movie of the evolution of electronic states (yellow lights around molecules) before the molecules blow apart.

On bright summer days, the sunlight all around us is breaking bad by breaking bonds. Chemical bonds.

Ultraviolet light shatters the links between atoms in the DNA of our skin cells, potentially causing cancer. UV light also breaks oxygen bonds, eventually creating ozone, and cleaves hydrogen off other molecules to leave behind free radicals that can damage tissue.

University of California, Berkeley, chemists using some of the shortest laser pulses available -- one quintillionth of a second -- have now been able to resolve the step-by-step process leading to the exploding of a chemical bond, essentially making a movie of the event. They can follow electrons indecisively bouncing around in various states in the molecule before the bond breaks, and the atoms go their separate ways.

"Think about a molecule, rhodopsin, in the eye," said first author Yuki Kobayashi, a UC Berkeley doctoral student. "When light hits the retina, rhodopsin absorbs the visible light, and we can see things because rhodopsin's bond's conformation changes."

In fact, when the light energy is absorbed, a bond in rhodopsin twists, instead of breaks, triggering other reactions that result in the perception of light. The technique Kobayashi and his UC Berkeley colleagues, professors Stephen Leone and Daniel Neumark, developed could be used to study in detail how this light absorption leads to twisting after the molecule passes through an excited state called an avoided crossing or conical intersection.

Attosecond lasers -- an attosecond is a billionth of a billionth of a second -- have been around for about a decade and are used by scientists to probe very fast reactions. Since most chemical reactions occur rapidly, these fast-pulse lasers are key to "seeing" how the electrons that form the chemical bond behave when the bond breaks and/or reforms.

Leone, a professor of chemistry and of physics, is an experimentalist who also uses theoretical tools and is a pioneer in using attosecond lasers to probe chemical reactions. He has six of these X-ray and extreme ultraviolet (collectively, XUV) lasers in his UC Berkeley laboratory.

Working with one of the simplest of molecules, iodine monobromide (IBr) -- which is one iodine atom linked to one bromine atom -- the UC Berkeley team hit the molecules with an 8 femtosecond pulse of visible light to excite one of their outermost electrons, then probed them with attosecond laser pulses.

Pulsing the attosecond XUV laser at timed intervals of 1.5 femtosecond (a femtosecond is 1,000 attoseconds), much like using a strobe light, the researchers could detect the steps leading to the breakup of the molecules. The high-energy XUV laser was able to explore the excited energy states relative to the molecule's inner electrons, which normally do not participate in chemical reactions.

"You are kind of making a movie of the pathways of the electron when it approaches the crossing and the probability of it going along one path or along another," Leone said. "These tools we are developing allow you to look at solids, gases and liquids, but you need the shorter time scales (provided by an attosecond laser). Otherwise, you only see the beginning and the end, and you don't know what else happened in between."

The experiment showed clearly that the outer electrons of IBr, once excited, suddenly see a variety of states or places they could be and explore many of them before deciding which path to take. In this simple molecule, however, all paths lead to the electron settling on either iodine or bromine and the two atoms flying apart.

In larger molecules, which the team hopes soon to explore, excited electrons would have more choices, some where the energy goes into a twist, like with rhodopsin, or into molecular vibration without the molecules breaking apart.

"In biology, it turns out that evolution has selected things that are extremely effective at absorbing the energy and not breaking a bond," Leone said. "When something goes wrong in your chemistry is when you see diseases cropping up."