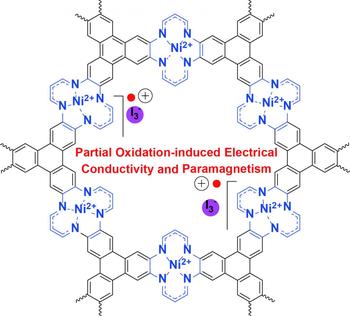 Chemists at the Center for Multidimensional Carbon Materials (CMCM), within the Institute for Basic Science (IBS, South Korea), have reported the synthesis of a novel type of 2D metal organic framework (MOF) with interesting electrical conductivity and magnetic properties. Published in the Journal of the American Chemical Society, this new material may potentially contribute to optoelectronics, photovoltaics, (photo)electrocatalysis, and energy storage.

Also known as sponge-like or Swiss-cheese-like materials, MOFs are made of metal ions connected to organic ligands and are characterized by nano-sized holes. IBS researchers in collaboration with the School of Materials Science at the Ulsan National Institute of Science and Technology (UNIST) designed and synthesized Ni(II) tetraaza[14]annulene-linked MOF (NiTAA-MOF), where the metal component is nickel and the nickel tetraaza[14]annulene molecules are used as MOF building blocks for the first time.

In addition, the team checked how this material becomes magnetized in an applied magnetic field. Magnetization measurements performed by the researchers of the School of Materials Science showed that iodine-doped NiTAA-MOF is paramagnetic, that is it is weakly attracted by an external magnetic field, and becomes antiferromagnetic at very low temperatures. This means that it could become useful as a polarizing agent in dynamic nuclear polarization-nuclear magnetic resonance (DNP-NMR) that is used in experiments for material characterization.

The 2D MOF structure was also modeled through detailed calculations and analyzed by a variety of methods, such as X-ray diffraction, infrared, X-ray photoelectron, diffuse reflectance UV-vis, electron paramagnetic resonance, and Raman spectroscopies.

"Our work can contribute to the fundamental understanding of structure-property relationships in 2D electrically conductive MOFs, and may pave the way to develop new electrically conductive MOFs," says Professor Ruoff, one of the corresponding authors of this study and UNIST professor. "Besides, the as-synthesized and iodine-doped NiTAA-MOF might be applicable in catalase mimics, catalysis, and energy storage."