Light at the end of the nanotunnel for future catalysts 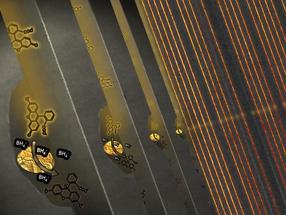 A nanoreactor developed at Chalmers University of Technology visualises the activity of individual catalytic nanoparticles. To identify the efficiency of each particle in the catalytic process, the researchers isolated individual gold nanoparticles in separate nanotunnels. They then sent in two kinds of molecules that react with each other on the particles' surfaces. One molecule (fluorescein) is fluorescent and when it meets its partner molecule (borohydride) the light emission stops upon reaction between the two. This makes it possible to track the catalytic process.

Catalysts increase the rate of chemical reactions. They play a vital role in many important industrial processes, from making fuels to medicines, to helping limit harmful vehicle emissions. They are also essential building blocks for new, sustainable technologies like fuel cells, where electricity is generated through a reaction between oxygen and hydrogen. Catalysts can also contribute to breaking down environmental toxins, through cleaning water of poisonous chemicals, for example.

To design more effective catalysts for the future, fundamental knowledge is needed, such as understanding catalysis at the level of individual active catalytic particles.

To visualise the problem of understanding catalytic reactions today, imagine a crowd at a football match, where a number of spectators light up flares. The smoke spreads rapidly through the crowd, and once a smoke cloud has formed, it is almost impossible to say who actually lit the flares, or how powerfully each one is burning. The chemical reactions in catalysis occur in a comparable way. Millions of individual particles are involved, and it is currently very difficult to track and determine the roles of each specific one - how effective they are, how much each has contributed to the reaction.

To better understand the catalytic process, it is necessary to investigate it at the level of individual nanoparticles. The new nanoreactor has allowed the Chalmers researchers to do exactly this. The reactor consists of around 50 glass nanotunnels filled with liquid, arranged in parallel. In each tunnel the researchers placed a single gold nanoparticle. Though they are of similar size, each nanoparticle has varied catalytic qualities - some are highly effective, others decidedly less optimal. To be able to discern how size and nanostructure influence catalysis, the researchers measured catalysis on the particles individually.

"We sent into the nanotunnels two types of molecules, which react with each other. One molecule type is fluorescent and emits light. The light is only extinguished when it meets a partner of the second type on the surface of the nanoparticles, and a chemical reaction between the molecules occurs. Observing this extinction of the 'light at the end of the nanotunnel', downstream of the nanoparticles, allowed us to track and measure the efficiency of each nanoparticle at catalysing the chemical reaction," says Sune Levin, Doctoral Student at the Department of Biology and Biotechnology at Chalmers University of Technology, and lead author of the scientific article.

He carried out the experiments under the supervision of Professors Fredrik Westerlund and Christoph Langhammer. The new nanoreactor is a result of a broad collaboration between researchers at several different departments at Chalmers.

"Effective catalysis is essential for both the synthesis and decomposition of chemicals. For example, catalysts are necessary for manufacturing plastics, medicines, and fuels in the best way, and effectively breaking down environmental toxins," says Fredrik Westerlund, Professor at the Department of Biology and Biotechnology at Chalmers.

Developing better catalyst materials is necessary for a sustainable future and there are big social and economic gains to be made.

"If catalytic nanoparticles could be optimally refined, society could derive enormous benefit. In the chemical industry for example, making certain processes just a few per cent more effective could translate to significantly increased revenue, as well as drastically reduced environmental impacts," says research project leader Christoph Langhammer, Professor at the Department of Physics at Chalmers.