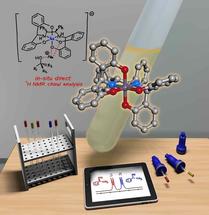 Enantiopure chiral alcohols are ubiquitous in nature and widely utilized as pharmaceuticals. This importance of chirality in synthetic and medicinal chemistry has advanced the search for rapid and facile methods to determine the enantiomeric purities of compounds. To date, chiral analysis has been performed using high-performance liquid chromatography (HPLC) with chiral columns.

Along with the HPLC technique, chiral analysis using NMR spectroscopy has gained tremendous attention as an alternative to traditionally employed chromatographic methods due to its simplicity and rapid detection for real-time measurement. However, this method carries drawbacks such as line-broadening, narrow substrate scope, and poor resolution. Thus, compared with popular methods of chromatographic analysis, NMR spectroscopy is infrequently used for chiral analysis.

Instead, the KAIST team successfully varied the physical properties of metal complexes to induce stronger interactions with alcohols rather than the strategy of using multifunctional analytes, in the hopes of developing a universal chiral solvating agent for alcohols. Compared to the current method of chiral analysis used in the pharmaceutical industry, alcohols that do not possess chromophores can also be directly analyzed with the gallium complexes.

Professor Kim said that this method could be a complementary chiral analysis technique at the industry level in the near future. He added that since the developed gallium complex can determine enantiomeric excess within minutes, it can be further utilized to monitor asymmetric synthesis. This feature will benefit a large number of researchers in the organic chemistry community, as well as the pharmaceutical industry.