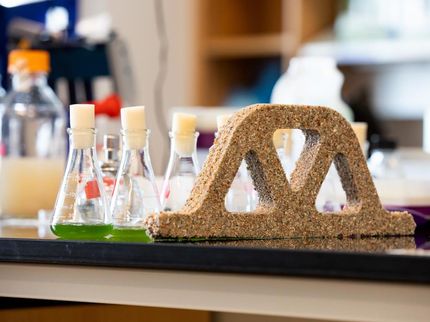 College of Engineering and Applied Science at Colorado University Boulder

This photograph shows green photosynthetic cyanobacteria growing and mineralizing in the sand-hydrogel framework. The living material has similar strength to cement-base mortar.

Cement and concrete haven't changed much as technology in over a hundred years, but researchers in Colorado are revolutionizing building materials by literally bringing them to life. The method developed, presented January 15 in the journal Matter, combines sand and bacteria to build a living material that has structural load-bearing and biological function.

The team created a scaffold out of sand and hydrogel for the bacteria to grow in. The hydrogel retains moisture and nutrients for the bacteria to proliferate and mineralize, a process similar to the formation of seashells in the ocean. Combining the three, the researchers created a green living material that demonstrates similar strength to cement-based mortar.

"We use photosynthetic cyanobacteria to biomineralize the scaffold, so it actually is really green. It looks like a Frankenstein-type material," says senior author Wil Srubar, who heads the Living Materials Laboratory at the University of Colorado Boulder. "That's exactly what we're trying to create--something that stays alive."

The hydrogel-sand brick is not only alive, but it also reproduces. By splitting the brick in half, the bacteria can grow into two complete bricks with the help of some extra sand, hydrogel, and nutrients. Instead of manufacturing the bricks one by one, Srubar and his team demonstrated that one parent brick could reproduce up to eight bricks after three generations.

"What we're really excited about is that this challenges the conventional ways in which we manufacture structural building materials," says Srubar. "It really demonstrates the capability of exponential material manufacturing."

Concrete is the second most-consumed material on earth after water. The production of cement, the powder to make concrete, alone is responsible for 6 percent of CO2 emissions, and concrete also releases CO2 when it cures. The method developed by Srubar and his team provides a green alternative to modern building materials. However, there is a trade-off with this green material.

The brick needs to be completely dried out to attain the maximum structural capacity (i.e., strength), but at the same time, drying stresses the bacteria and compromises its viability. To maintain structural function and ensure microbial survivability, the concept of optimum relative humidity and storage conditions is critical. Utilizing the humidity and temperature as physical switches, the researchers can control when the bacteria grow and when the material stays dormant to serve structural functions.

"This is a material platform that sets the stage for brand new exciting materials that can be engineered to interact and respond to their environments," says Srubar. "We are just trying to bring building materials to life, and I think that is the nugget in this whole thing. We're just scratching the surface and laying the foundation of a new discipline. The sky is the limit."

The next step for Srubar and his team is to explore the numerous applications that the material platform brings. Srubar envisions introducing bacteria with different functionalities to the material platform to create new materials with biological functions, such as ones that sense and respond to toxins in the air. Other applications include building structures where there are limited resources like the desert or even another planet--Mars.

"In austere environments, these materials would perform especially well because they use light from the sun to grow and proliferate with very little exogenous material needed for their growth," says Srubar. "It's going to happen one way or another, and we're not going to be trucking bags of cement all the way to Mars. I really do think that we'll be bringing biology with us once we go."