A pigment from ancient Egypt to modern microscopy 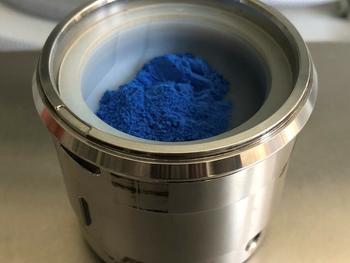 Egyptian blue: the researchers obtained the nanosheets from this powder.

Egyptian blue is one of the oldest manmade colour pigments. It adorns, for instance, the crown of the world famous bust of Nefertiti. But the pigment can do even more. An international research team led by Dr Sebastian Kruss from the Institute of Physical Chemistry at the University of Göttingen has produced a new nanomaterial based on the Egyptian blue pigment, which is ideally suited for applications in imaging using near infrared spectroscopy and microscopy.

Microscopy and optical imaging are important tools in basic research and biomedicine. They use substances that can release light when excited. Known as “fluorophores”, these substances are used to stain very small structures in samples, enabling clear resolution using modern microscopes. Most fluorophores shine in the range of light visible to humans. When using light in the near infrared spectrum, with a wavelength starting at 800 nanometres, light penetrates even deeper into tissue and there are fewer distortions to the image. So far, however, there are only a few known fluorophores that work in the near infrared spectrum.

The research team has now succeeded in exfoliating extremely thin layers from grains of calcium copper silicate, also known as Egyptian blue. These nanosheets are 100,000 times thinner than a human hair and fluoresce in the near infrared range. "We were able to show that even the smallest nanosheets are extremely stable, shine brightly and do not bleach," says Dr Sebastian Kruss, "making them ideal for optical imaging.“

The scientists tested their idea for microscopy in animals and plants. For example, they followed the movement of individual nanosheets in order to visualise mechanical processes and the structure of the tissue around cell nuclei in the fruit fly. In addition, they integrated the nanosheets into plants and were able to identify them even without a microscope, which promises future applications in the agricultural industry. "The potential for state-of-the-art microscopy from this material means that new findings in biomedical research can be expected in the future," says Kruss.