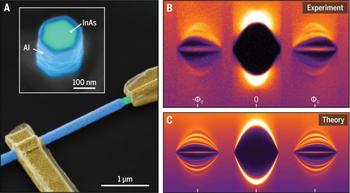 A pencil shaped semiconductor, measuring only a few hundred nanometers in diameter, is what researches from the Center for Quantum Devices, Niels Bohr Institute, at University of Copenhagen, in collaboration with Microsoft Quantum researchers, have used to uncover a new route to topological superconductivity and Majorana zero modes in a study recently published in Science.

The new route that the researchers discovered uses the phase winding around the circumference of a cylindrical superconductor surrounding a semiconductor, an approach they call "a conceptual breakthrough".

"The result may provide a useful route toward the use of Majorana zero modes as a basis of protected qubits for quantum information. We do not know if these wires themselves will be useful, or if just the ideas will be useful," says Charles Marcus, Villum Kann Rasmussen Professor at the Niels Bohr Institute and Scientific Director of Microsoft Quantum Lab in Copenhagen.

"What we have found appears to be a much easier way of creating Majorana zero modes, where you can switch them on and off, and that can make a huge difference"; says postdoctoral research fellow, Saulius Vaitiekėnas, who was the lead experimentalist on the study.

"The significance of this result is that it unifies different approaches to understanding and creating topological superconductivity and Majorana zero modes", says professor Karsten Flensberg, Director of the Center for Quantum Devices.

Looking back in time, the findings can be described as an extension of a 50-year old piece of physics known as the Little-Parks effect. In the Little-Parks effect, a superconductor in the shape of a cylindrical shell adjusts to an external magnetic field, threading the cylinder by jumping to a "vortex state" where the quantum wavefunction around the cylinder carries a twist of its phase.

Charles M. Marcus, Saulius Vaitiekėnas, and Karsten Flensberg from the Niels Bohr Institute at the Microsoft Quantum Lab in Copenhagen.

What was needed was a special type of material that combined semiconductor nanowires and superconducting aluminum. Those materials were developed in the Center for Quantum Devices in the few years. The particular wires for this study were special in having the superconducting shell fully surround the semiconductor. These were grown by professor Peter Krogstrup, also at the Center for Quantum Devices and Scientific Director of the Microsoft Quantum Materials Lab in Lyngby.

The research is the result of the same basic scientific wondering that through history has led to many great discoveries.

"Our motivation to look at this in the first place was that it seemed interesting and we didn't know what would happen", says Charles Marcus about the experimental discovery, which was confirmed theoretically in the same publication. Nonetheless, the idea may indicate a path forward for quantum computing.