Using a game of physical skill to explain lithium-ion batteries 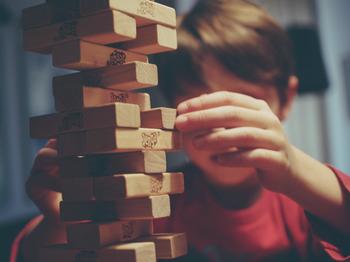 Photo by Michał Parzuchowski on Unsplash

Tower block games can be used to explain to schoolchildren how lithium-ion batteries work, meeting an educational need to better understand a power source that has become vital to everyday life.

While lithium-ion batteries are abundant in so many of our electronic devices, from smart phones to electric vehicles, the resources available to teach children how they work and why they are important are limited.

A team in the University of Birmingham's School of Chemistry, has devised an educational tool which uses a tower block game to explain the processes at work inside the battery cells and the electrochemistry behind them.

A rechargeable Li-ion battery consists of an oxide and a graphite electrode. These are commonly built in layers separated with an electrolyte. When the battery is charged, lithium ions move from the graphite to the oxide electrode via the electrolyte. Current collectors, which the electrodes are coated onto, allow electrons to move via an external circuit, providing power.

By using the layers of blocks, children can get a sense of how the battery is constructed and how the different components interact with each other. The battery tower block game can show battery operation and key characteristics. The intercalation, or layered, chemistry of charging and discharging this type of battery can be easily visualised. Through removing a few blank blocks in the graphite electrode (these blocks represent empty space between the layers of graphite), a student can move the Li-ion blocks from the oxide electrode to the graphite electrode. The reverse process will occur on discharge.

The simplicity of this demonstration provides a basis for complex chemistry and redox reactions to be explained. The importance and safety of rate of charge for differing applications can be shown too, when students remove the lithium ion blocks from the oxide electrodes at varying rates. The faster charge invariably leads to the tower block game structure collapsing.

The tower block game can also demonstrate how the performance of the battery reduces over continued use by showing how the blocks become slightly displaced as the lithium blocks are removed and reinserted.

Researcher Elizabeth Driscoll explains: "Hands-on demonstrations are known to be a useful way of supporting learning - teachers often use lemons or potatoes to explain conventional non-rechargeable batteries, for example. But we know that electrochemistry is a tricky area for teachers, which often leads to misconceptions among students. We wanted to design a hands-on activity that would help address this and explain this rechargeable-type."

By introducing tower block sets with strong contrasting colours and different textures, the team were also able to devise teaching tools that would be more inclusive for students who are blind or partially-sighted.

The activities have been trialled with multiple visiting schools over the past year, including: the Royal Society of Chemistry's Top of the Bench demonstration lecture, with positive feedback from both teachers and students. The sets have also made an appearance at public events at museums, from the ThinkTank science museum in Birmingham to the Manchester Science Museum and the Royal Institution in London.

The next step for the team will be to enable the activity to be widely accessible to more students and provide support for educators in these topics. Funding from the Faraday Institution and the Royal Society of Chemistry has already enabled 100 small tower block game sets to be supplied to a Birmingham secondary school. Tactile classroom sets will also be provided to New College Worcester and Bolton Sensory Support service. Educators interested in producing their own sets can access full instructions via the open access paper in the Journal of Chemical Education.