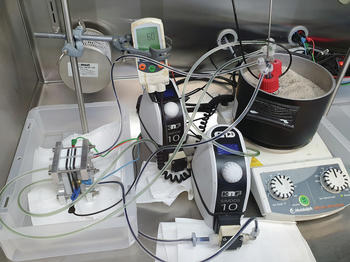 The share of energy from renewable sources is constantly on the rise in Germany. At the beginning of 2020, for the first time ever, renewable energy was able to cover more than half of the electricity consumed in Germany. But the more important renewable energy sources become, the more urgent is the need to store the electricity pro­duced in this way. Green energy could then also be used when the sun is not shining on the solar panels or no airflow is driving the wind turbines. To achieve this, suitable energy sto­rage devices are indispensable. Researchers at the Friedrich Schiller University Jena (Ger­many) have recently developed promising new polymer electrolytes for redox flow batteries, which are flexible, efficient, and environmentally friendly.

The new material developed by the Jena chemists is used in so-called redox flow batteries. “In this type of battery, the energy-storing components are dissolved in a solvent and can therefore be stored at a decentralised location, which allows the battery to be scaled as re­quired, from a few millilitres to several cubic metres of electrolyte solution,” says Prof. Dr Ulrich S. Schubert of the Center for Energy and Environmental Chemistry Jena (CEEC Jena) at the Friedrich Schiller University.

Thanks to this flexibility, redox flow batteries generally have a great potential to become an important means of energy storage in the future. Until now, however, they suffered from two weaknesses that have prevented their widespread use. The first was the frequent usage of environ­mentally hazardous and toxic heavy metal salts, such as vanadium dissolved in sul­furic acid, as electrolytes. The other problem was the restriction of the batteries to a maxi­mum working temperature of 40 degrees Celsius, which necessitated the usage of an elabo­rate cooling system. With the help of the new material, these two problems were solved.

“We have designed a new type of polymer that is soluble in water, which makes it suitable for use in an aqueous electrolyte, and that contains iron, which provides the ability to store elec­tricity,” explains Schubert. “At the same time, the polymer can cope with a significantly higher temperature of up to 60 degrees Celsius, so that the additional expense for a sensitive tem­pe­rature management is eliminated.” In addition, during their tests with the new system, the Jena researchers discovered that it also works more efficiently than its predecessors.

This means that electricity can be stored in a non-hazardous, water-based solution, which is then stored temporarily in tanks, and the electricity in the battery can be used again the next day without significant losses or additional effort. Systems of this kind can also be used in warmer re­gions, such as Africa, India or Brazil. “By improving the energy storage medium, we believe that the redox flow battery is once again in a good position to make an important con­tribu­tion as the energy storage technology of the future,” says Schubert. “And our develop­ment shows once again the great importance of novel polymers for the development of innovative storage methods.”