Researchers have developed organic-only dyes that can form films resembling gold or bronze, without the need for metals 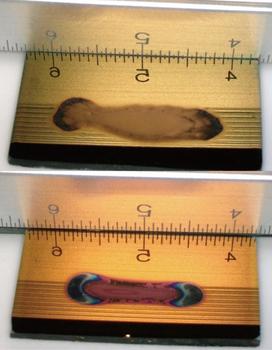 Organic-only dyes produce films with gold- (top) and bronze- (bottom) like effects; a stainless steel ruler was placed next to each film to observe the reflection.

Lustrous metallic paints are used to enhance the beauty of many products, such as home decorations, cars and artwork. But most of these pigments owe their sheen to flakes of aluminum, copper, zinc or other metals, which have drawbacks. Now, researchers reporting in ACS Omega have developed organic-only dyes that can form films resembling gold or bronze, without the need for metals.

In paints, metal flakes tend to settle to the bottom of the can, requiring regular stirring during use and storage. Multiple coats of metallic paint are often needed to provide good coverage, which adds weight to the object being painted. Also, when used in ink-jet printers, metallic pigments can clog ink nozzles. For these and other reasons, researchers are trying to develop nonmetallic, organic paints with metal-like luster. But so far, few candidates have displayed all of the desired qualities of solubility in solvents, good film-forming properties and excellent stability over time. Katsuyoshi Hoshino and colleagues from Chiba University in Japan recently introduced a perchlorate-doped 3-methoxythiophene oligomer that checked all of these boxes, but it had to be dissolved in solvents that are considered unsafe for painters. To develop an industrially acceptable metal-effect dye, the researchers wanted to make and test chloride-doped 3-methoxythiophene oligomers.

The team made two different versions of the chloride-doped oligomers, which, unlike their previously reported perchlorate-doped counterpart, dissolved in water. They coated glass plates with solutions of the new dyes and allowed them to dry. The two chloride-doped oligomers produced lustrous gold- or bronze-like films, respectively, but they each had a non-glossy dark stain, which resembled a coffee ring stain, near the center. Although more research is needed to determine how to prevent this stain from forming, both films had higher reflectance than the one made by the perchlorate-doped oligomer. The paints are soluble in water but can be made water-resistant by dehydration, which makes their industrial implementation feasible. The new dyes could be used in commercial ink-jet printers, and they also might someday be implemented in organic electronic systems, the researchers say.