The separation process is both energy efficient and cost-effective 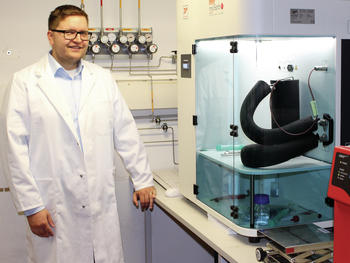 Martin Rieß M.Sc. in front of the measuring system for dynamic gas adsorption in one of Bayreuth’s laboratories for Inorganic Chemistry.

Chemists at the University of Bayreuth have developed a material that could well make an important contribution to climate protection and sustainable industrial production. With this material, the greenhouse gas carbon dioxide (CO₂) can be specifically separated from industrial waste gases, natural gas, or biogas, and thereby made available for recycling. The separation process is both energy efficient and cost-effective. In the journal "Cell Reports Physical Science" the researchers present the structure and function of the material.

The "Green Deal", presented by the European Commission in 2019, calls for the net emissions of greenhouse gases within the EU to be reduced to zero by 2050. This requires innovative processes that can separate and retain CO₂ from waste gases and other gas mixtures so that it is not released into the atmosphere. The material developed in Bayreuth has one fundamental advantage over previous separation processes: It is capable of completely removing CO₂ from gas mixtures without chemically binding CO₂. These gas mixtures can be waste gases from industrial plants, but also natural gas or biogas. In all these cases, CO₂ accumulates in the cavities of the material solely due to physical interaction. From there, it can be released without great expenditure of energy, to be made available again as a resource for industrial production. Hence, the separation process works, chemically speaking, according to the principle of physical adsorption. Like a spacious storage tank, the new material can be filled with and emptied of carbon dioxide in an energy-efficient way. In Bayreuth laboratories, it was designed in such a way as to only separate out CO₂ and no other gas from the most varied gas mixtures.

"Our research team has succeeded in designing a material that fulfils two tasks at the same time. On the one hand, the physical interactions with CO₂ are strong enough to free and retain this greenhouse gas from a gas mixture. On the other hand, however, they are weak enough to allow the release of CO₂ from the material with only a small amount of energy", says Martin Rieß M.Sc., first author of the new publication and doctoral researcher at the Inorganic Chemistry I research group at the University of Bayreuth.

The new material is an inorganic-organic hybrid. The chemical basis is clay minerals consisting of hundreds of individual glass platelets. These are only one nanometre thick each, and arranged precisely one above the other. Between the individual glass plates there are organic molecules that act as spacers. Their shape and chemical properties have been selected so that the pore spaces created are optimally tailored to accumulate CO₂. Only carbon dioxide molecules can penetrate into the pore system of the material and be retained there. In contrast, methane, nitrogen, and other exhaust gas components must remain outside due to the size of their molecules. The researchers have used the so-called molecular sieve effect to increase the material's selectivity for CO₂. They are currently working on the development of a membrane system based on clay minerals, designed to allow the continuous, selective, and energy-efficient separation of CO2 from gas mixtures.

The development of a hybrid material tailor-made for the separation and supply of CO₂ was made possible thanks to a special measuring system set up in the Bayreuth laboratories which allows the precise determination of quantities of adsorbed gases and of the selectivity of the adsorbing material. This has enabled industrial processes to be reproduced realistically. "All criteria relevant to the evaluation of industrial CO₂ separation processes have been completely fulfilled by our hybrid material. It can be produced cost-effectively, and stands to make an important contribution to reducing industrial carbon dioxide emissions, but also to the processing of biogas and acidic natural gas," says Martin Rieß.