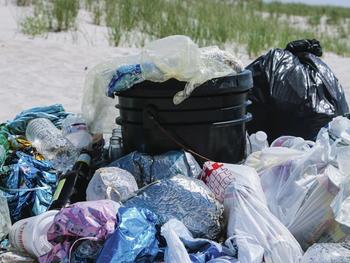 Photo by Brian Yurasits on Unsplash

While plastics recycling is not new science, current processes don't make it economically worthwhile-- waste plastics get "down-cycled" into lower grade, less useful material. It's a challenge that continues to be an obstacle in tackling a growing global pollution crisis in single use plastics.

A multi-institutional team of scientists led by the U.S. Department of Energy's Ames Laboratory has developed a first-of-its-kind catalyst that is able to process polyolefin plastics such as polyethylene and polypropylene, types of polymers widely used in things like plastic grocery bags, milk jugs, shampoo bottles, toys, and food containers. The process results in uniform, high-quality components that can be used to produce fuels, solvents, and lubricating oils, products that have high value and could potentially turn these and other used plastics into an untapped resource.

"We've made a big step forward with this work," said Aaron Sadow, a scientist at Ames Laboratory and the Director of the Institute for Cooperative Upcycling of Plastics (iCOUP). "We hypothesized that we could borrow from nature, and mimic the processes by which enzymes precisely break apart macromolecules like proteins and cellulose. We succeeded in doing that, and we're excited to pursue optimizing and developing this process further."

The unique process relies on nanoparticle technology. Ames Lab scientist Wenyu Huang designed a mesoporous silica nanoparticle consisting of a core of platinum with catalytic active sites, surrounded by long silica pores, or channels, through which the long polymer chains thread through to the catalyst. With this design, the catalyst is able to hold on to and cleave the longer polymer chains into consistent, uniform shorter pieces that have the most potential to be upcycled into new, more useful end products.

"This type of controlled catalysis process has never before been designed based on inorganic materials," Huang, who specializes in the design of structurally well-defined nano-catalysts. "We were able to show that the catalytic process is capable of performing multiple identical deconstruction steps on the same molecule before releasing it."

Ames Laboratory's solid state NMR expert Fred Perras' measurements allowed the team to scrutinize the catalyst's activity at the atomic scale, and confirmed that the long polymer chains moved readily through the catalyst pores in the manner resembling the enzymatic processes that the scientists were aiming to emulate.

This research will be expanded and continued under direction of the Institute for Cooperative Upcycling of Plastics (iCOUP), led by Ames Laboratory. iCOUP is an Energy Frontier Research Center consisting of scientists from Ames Laboratory, Argonne National Laboratory, UC Santa Barbara, University of South Carolina, Cornell University, Northwestern University, and the University of Illinois Urbana-Champaign.