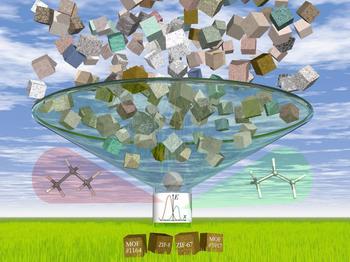 Researchers at the University of Liverpool and the King Abdullah University of Science and Technology have made reported some exciting findings relating to metal-organic frameworks (MOFs), a class of porous materials, which could benefit a wide range of important gas separation processes.

Metal-organic frameworks (MOFs) are a relatively new class of porous, crystalline materials with a broad range of applications.

Some MOFs can act as a molecular sieve, allowing one type of gas molecule from a mixture to pass through while blocking the others. For example, it is known that some MOFs separate propylene from propane, an important process in the manufacture of polypropylene plastics for which high purity propylene is required.

In a first paper published in Nature Communications, researchers demonstrate that unlike a kitchen sieve, these three dimensional molecular sieves can change their pore shape and their flexibility is vital for this performance.

The computational modelling supported by experimental X-ray data indicate that for one such high-performing MOF, called KAUST-7, the structural changes in the MOF triggered by the presence of the propylene and propane gas molecules are qualitatively different and result in stronger adsorption and faster transport of propylene thus essentially sieving propane molecules out.

However, it is hard to predict which other kinds of MOFs possess this functional flexibility and therefore might also be good for a given gas separation because the performance is controlled by specific molecular interactions that are hard to anticipate or identify experimentally.

In a second paper published in Physical Chemistry Chemical Physics, researchers focus on this challenge.

They developed a computational screening approach to assess over four thousand previously reported MOFs for their flexibility when acting like a molecular sieve. Using this approach, they identified the top four MOFs which show the potential to separate propylene from propane - two of them have been already known to have a good performance while the other two have not yet been tested for this application experimentally.

Dr Matthew Dyer, a lecturer in Chemistry and part of the University's Leverhulme Research Centre for Functional Materials Design, said: "MOFs have attracted considerable interest in recent years and there are great hopes for technical applications especially for flexible MOFs.

"Our research adds to our knowledge of MOFs, why some are able to act as sieves and which ones show flexibility.

"Using a computational approach, we are able to identify flexible MOFs and these findings have the potential to make the process of purifying gases more energy efficient. This is important in terms for the manufacture of high-quality plastics which need pure starting compounds that are commonly extracted from gaseous by-products in petrochemical processing. "

"Such high throughput screening approaches can be applied to many different materials with varying potential applications. They have the potential to change the way that we find materials to meet technological challenges."