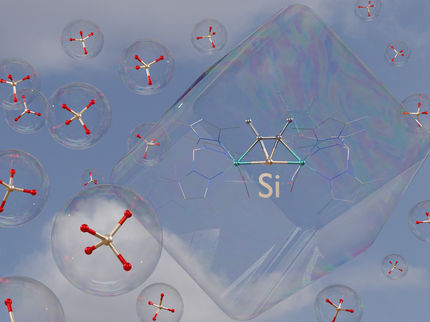 3D representation of one of the new molecules. Silicate ions in tetrahedral arrangement can be seen in the spherical soap bubbles for comparison.

Chemists at the University of Bonn have synthesized extremely unusual compounds. Their central building block is a silicon atom. Different from usual, however, is the arrangement of the four bonding partners of the atom, which are not in the form of a tetrahedron around it, but flat like a trapezoid. This arrangement is usually energetically extremely unfavorable, yet the molecules are very stable. Their properties are completely unknown so far; researchers now want to explore them.

Like its relative carbon, silicon generally forms four bonds with other atoms. When it does, the result is usually a tetrahedron. The silicon atom is located in the center, its bonding partners (the so-called ligands) at the tetrahedral corners. This arrangement is most favorable energetically. It therefore arises quasi automatically, just as a soap bubble is usually spherical.

Researchers led by Prof. Dr. Alexander C. Filippou of the Institute for Inorganic Chemistry at the University of Bonn have now constructed silicon-containing molecules that are as unusual as a cube-shaped soap bubble. In these, the four ligands do not form a tetrahedron, but a distorted square, a trapezoid. They lie in one plane together with the silicon. "Despite this, the compounds are so stable that they can be filled into bottles and stored for weeks without any problems," explains Dr. Priyabrata Ghana, a former doctoral student who has since moved to RWTH Aachen University.

The researchers themselves were surprised by this unusual stability. They discovered the reason by modeling the molecules on the computer. The ligands also form bonds with each other. In the process, they form a solid framework. This appears to be so strong that it completely prevents the trapezoidal arrangement from "snapping" into a tetrahedron. "Our computer calculations indicate that there is no structure for the molecules that would be more energetically favorable than the planar trapezoidal shape," emphasizes Jens Rump, a doctoral student at the Institute for Inorganic Chemistry.

The researchers grew crystals of the substances and then blasted them with X-rays. The X-ray light is scattered by the atoms and changes its direction. These deviations can therefore be used to calculate the spatial structure of the molecules in the crystal. Together with spectroscopic measurements, this method confirmed that ligands and silicon are indeed in the same plane in the new molecules.

Although the synthesis of the exotic compounds must be carried out under inert gas, it is otherwise comparatively simple. Producing the starting materials, on the other hand, is complex; one of them was first synthesized only just over ten years ago and has already been the source for the synthesis of several novel classes of silicon compounds.

The influence of the unusual structure on the properties of silicon, an important element for the electronics industry, is completely unclear at the moment. At any rate, for a long time it was considered completely impossible to produce such compounds.