Some 'children' compounds can be more toxic than the 'parent' PAHs 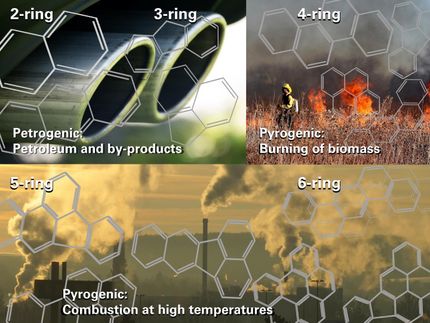 When power stations burn coal, a class of compounds called Polycyclic Aromatic Hydrocarbons, or PAHs, form part of the resulting air pollution. Researchers have found that PAHs toxins degrade in sunlight into 'children' compounds and by-products. Some 'children' compounds can be more toxic than the 'parent' PAHs. Rivers and dams affected by PAHs are likely contaminated by a much larger number of toxins than are emitted by major polluters. The study by researchers from the University of Johannesburg and the University of Maryland appeared in Chemosphere.

When power stations burn coal, a class of compounds called Polycyclic Aromatic Hydrocarbons, or PAHs, form part of the resulting air pollution. Researchers have found that PAHs toxins degrade in sunlight into 'children' compounds and by-products.

Some 'children' compounds can be more toxic than the 'parent' PAHs. Rivers and dams affected by PAHs are likely contaminated by a much larger number of toxins than are emitted by major polluters, researchers show in Chemosphere.

A coal-fired power station and a cigarette have more in common than one might think. So do the exhaust pipes from cars and burning crop residues. The same is true for an aeroplane passing high over a wildfire ravaging trees and grass.

All of these produce a class of 'signature' toxic chemicals, called PAHs, when fossil fuels or organic matter is not completely burnt up. These PAH signatures are distinct enough that scientists can tell what the likely sources of pollution are. They can do that by analyzing water and sediment samples from rivers and dams affected by the pollution.

Some of the 'parent' PAH compounds from pollution sources break up into smaller 'children' compounds, and form additional by-products when exposed to sunlight, researchers show in a study published in Chemosphere.

Some 'children' compounds are more toxic than the original 'parent' PAHs, other studies have found.

It means that there are probably more toxic, carcinogenic PAH compounds present in dams and rivers - at the same time - than previously thought, says Dr Mathapelo Seopela, the lead author of the study. Seopela is a researcher in the Department of Chemistry at the University of Johannesburg.

"Burning processes create PAHs that vary in size from two to six fused benzene rings. The hotter the burning process, the bigger the compound that is formed, and the more harmful it is," she says.

"As an example, when coal is burned in a coal-fired power station for electricity, five and six-ring PAHs are likely to form. This is because the burning process is at a very high temperature, over a 1000 degrees Celsius."

These large PAH compounds travel with the rest of the smoke from the power station's cooling towers. Winds can then blow the compounds quite far away, to rivers, dams, agricultural land, or the next city.

"When gasoline is burnt in a car engine, two to three-ring PAHs usually form. Similar PAHs are formed by aeroplanes, when farmers burn crop residues or grass, or with burning wood," she says.

"The PAHs end up in the atmosphere, in the air we breathe. Often, they can travel very long distances from the sources that produced them, such as power stations or wildfires."

Many PAH compounds are very harmful. They are formed from two or more fused benzene molecules, or rings, during the incomplete combustion of fossil fuels or organic matter. Benzene is a highly flammable, toxic liquid. It is partly responsible for the characteristic smell at a gasoline station.

The simplest PAH is naphtalene, which has two benzene rings. Some people use naphtalene mothballs to protect their clothes from moths. It is toxic to people.

The next bigger PAH is anthracene, a component of coal tar, which has three benzene rings. Anthracene is a hazardous substance in the workplace. It is very toxic in water environments, and is considered a persistent and bioaccumulative pollutant.

A number of PAHs have been listed by organisations such as the EPA, WHO and European Commission as cancer-causing, or carcinogenic. This means people may get a form of cancer if they're exposed to those PAHs for a long time.

Some PAHs can cause permanent changes in the genes of animals, which can cause developmental delays or malformations in fish embryos. Such PAHs compounds are classified as mutagenic also.

When raindrops pull PAHs compounds down into rivers and dams, huge environmental challenges can be created. The rain delivers the toxins into drinking water, water used to irrigate food crops, and water for cattle. Fish accumulate the PAHs in their flesh.

"In our study, we looked at PAHs with two to six fused benzene rings. These represented pollution from wood fires and cars through to coal power stations.

"We knew that in general, PAHs compounds will start changing, or degrading, when the sun shines on them. But we wanted to find out what specific PAHs become when they degrade, and how fast it happens," says Seopela.

In previous research, she analysed water and sediments from a contaminated dam in South Africa for PAHs. Loskop Dam is fed by the Olifants River, in a major industrial, coal-mining and coal power station region in Mpumalanga.

Mass fish and crocodile deaths have been recorded in the river, and organic pollutants including PAHs were identified as contributing factors.

In other studies, researchers have found that PAHs break down in sunlight, but that the smaller 'children' compounds that are formed (photoproducts), can be more toxic than the bigger 'parent' compounds.

Seopela and the researchers from the Chesapeake Biological Laboratory of the University of Maryland Center for Environmental Science built a closed-circuit recirculation system for the study in their laboratory.

"We found that, when sunlight falls on a parent PAH, it breaks down to smaller 'children' PAHs, which we call degradation products. But at the same time, completely different by-products are also formed," says Prof Michael Gonsior from the Chesapeake Biological Laboratory at the University of Maryland.

"This is very concerning. The parent PAH compounds, the degraded children PAHs and the by-products, or photoproducts, are probably all present at the same time in rivers and dams affected by PAHs," he continues.

"We also found that generally the 5 to 6 ring PAHs break down much faster than two-ring PAHs in pure water, says Dr Leanne Powers, assistant research chemist at the Chesapeake Biological Laboratory.

"But the degradation slows down when there is more natural organic matter in the water. We expect that PAHs in the water or sediment of a murky river will take a long time to break down. A lot longer than the three hours and a bit the PAHs took to degrade in the pure water in our lab.

"The procedure used in this study can be used to understand how other PAHs degrade, and what they will become in freshwater environments", says Powers.

Says Seopela: "This means that people, animals and plants that depend on that water are likely exposed to a far greater number of toxins at the same time, than was emitted from the sources, such as power stations".