Harnessing the power of microbial communities for plastic degradation 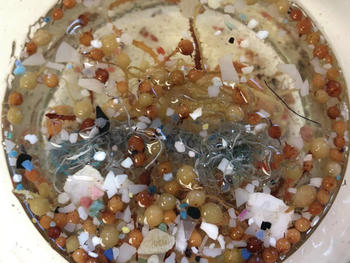 A Sargassum sample taken during Expedition SO279, with quite a few plastic particles. The more bacteria on the brown algae come into contact with plastic, the greater the chance that the bacterial community will develop methods to degrade the plastic.

Bacteria are extremely adaptable. The more plastic enters the environment, the more likely they are to find ways to extract energy from plastic and degrade them in the process. Us humans could take advantage of this. The trick is to find the respective bacteria and combine them in novel ways. In the international journal Trends in Microbiology, Kiel researchers are now proposing a new approach that should make the search faster and plastic degradation more effective.

For decades, mankind has been using the abilities of bacteria to keep the environment clean. One well-known example is the biological stage of sewage treatment plants. Here, bacteria and other microorganisms degrade organic pollutants in wastewater into their constituent parts. But in the recent past, the amount of waste consisting of polymeric carbon compounds - commonly called plastic - has been increasing significantly. So far, hardly any bacteria are known that can break down plastic. However, worldwide the search for them is in full swing.

A group of scientists from GEOMAR Helmholtz Centre for Ocean Research Kiel and Kiel University now proposes a previously neglected method to discover faster and more effective natural degradation methods for plastic based on bacteria. "We show that it would make much more sense to test entire bacterial communities for their capabilities instead of looking for individual bacterial species that produce enzymes with which they can degrade plastic," says Dr. Peter Deines of GEOMAR, lead author of the study.

The classic screen for bacteria with specific capabilities focuses on individual species. Once one is identified that is for example, able to use a specific enzyme to break down a particular type of plastic, the bacterium's genetic information is screened for the code for that enzyme. "But in doing so, there is a risk of only detecting information that is already known and overlooking other important bacterial properties," says Dr. Deines.

In addition, focusing on a single bacterial species carries a risk for later applications of the bacterium and its enzyme, for example in bioreactors. "We know from ecosystem biology that monocultures are not very resilient. In fact, bioreactors with only one bacterial species are prone to a high failure rate," reports the Kiel microbiologist.

In the approach favored by him and his colleagues, entire bacterial ecosystems are therefore sampled at locations where bacteria are very likely to come into contact with plastic. These can be the stomachs of fish, biofilms on large algae or the sediment of the sea floor. In the laboratory, these previously largely unexplored bacterial communities are then further exposed to plastic. If a community is shown to be able to degrade the plastic, it is selected for the next step.

"We propose to breed entire bacterial communities in the lab for increased plastic degradation. This process can be thought of as very similar to breeding for certain traits in breeds of pets or plants. When using this method, we do not need to know in advance what we are looking for, but are completely open to results. The risk of overlooking abilities is much lower. After all, a bacterium that can't do anything with plastic on its own might make a decisive contribution to its degradation in a complex community," says Dr. Deines. Subsequent artificial selection in the lab provides the microbial communities with the chance to improve their plastic degradation capabilities over the course of several generations. "Here we are using an approach from evolutionary biology," he adds.

The team plans to put the proposed methods into practice in the near future, focusing primarily on bacterial communities from the ocean. "Ultimately, the ocean is the major sink where most waste and pollutants end up. As part of the PLASTISEA project, we have already obtained many samples from the central Atlantic. We are now using these to look for ways to biodegrade plastic both in the classical way and with the new method. But of course, this can also be used to look for degradation options for many other pollutants," says co-author Prof. Dr. Hentschel Humeida, head of the Marine Symbioses research unit at GEOMAR.