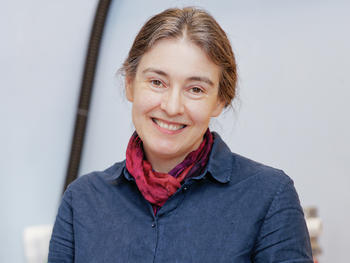 Grey pioneered the optimisation of batteries with the help of NMR spectroscopy. This method allows non-invasive insights into the inner workings of batteries – and is similar to magnetic resonance imaging, which doctors use to screen patients. Her NMR studies have helped to significantly increase the performance of lithium-ion batteries, which supply power to mobile phones, notebooks or e-vehicles, for example. Furthermore, Grey was instrumental in the development of new types of batteries – including lithium-air batteries, which have a tenfold increase in energy density, and others that charge very quickly and are particularly safe in operation. She is also conducting research into cost-effective and durable storage systems for electricity from renewable sources. The Briton sees her fundamental research as an important contribution to achieving the European Union's declared goal of climate neutrality by 2050.

The first mobile phones were reminiscent of bricks in terms of their volume and weight. They only became really manageable at the beginning of the 1990s with the powerful lithium-ion batteries. These battery types were actually developed for video cameras to be carried on the shoulder. Almost none of the engineers at the time had an inkling that lithium-ion batteries would open the door to future portable and internet-capable communication devices, let alone to today's era of electromobility.

»There have been significant advances in lithium-ion batteries since 1991, « explains Clare Grey. »Their energy density has tripled. That means their weight can be reduced by two thirds, while retaining the same electrical storage capacity. In addition, prices have fallen by 90 percent. « The British chemist has made a key contribution to this development. Grey is a pioneer in the study of solids with the help of NMR spectroscopy. NMR uses resonances of atomic nuclei to gain novel insights into materials such as batteries. With the help of NMR technology, Grey was able to study the electrochemical processes during the charging and discharging of batteries while they operate to follow the lithium ions as they move in and out of the battery materials.

Grey had already worked on NMR spectroscopy during her undergraduate studies

Clare Grey, 56, studied chemistry at Oxford University in the UK. At the age of 22, she published her first scientific article in the science magazine »Nature«. Following her doctorate in 1991, she went to Radboud University in Nijmegen, the Netherlands. In 1992/93 Grey worked as a visiting scientist at the US chemical company Dupont. From 1994, she was an assistant professor at the State University of New York at Stony Brook, where she became a full professor in 2001. In 2009, she became Geoffrey Moorhouse Gibson Professor at the UK's University of Cambridge. She has also been a Fellow of the Royal Society since 2011.

Grey had already worked on NMR spectroscopy during her undergraduate studies and used it to examine metals such as tin. At the time, this was new territory, because physicists and chemists usually study the structure of solids by bombarding them with X-rays. The diffraction of the X-rays reveals the internal structure of the samples. Using this method, the subsequent Nobel Prize winners James Watson and Francis Crick were able to detect the double helix structure of the hereditary molecule DNA in 1953. A particularly powerful alternative to this is NMR spectroscopy. The abbreviation NMR stands for »nuclear magnetic resonance«.

NMR is easiest with liquid samples in which the molecules move very fast, averaging out interactions between them. Grey, on the other hand, was one of the first in her field to use NMR to investigate solids such as metals. During her time in the USA, she met researchers from the Duracell company who inspired her to use NMR technology to study materials in batteries. »Previously, the usual investigations with X-rays only provided an average picture, « Grey says. »With the help of NMR, I was now able to detect the fine details in these often disordered materials. « Initially, she examined individual ingredients by opening the batteries at a certain stage of their charging and life cycle. The aim was partly to find out which chemical processes cause the batteries to age and how their lifespan and capacity can be increased. Later, Grey improved the NMR technology so that she could also use it to examine cells non-destructively during operation – so-called »in-situ« experiments. These measurements also helped to discover short-lived substances and speed up the studies enormously.

Grey is also researching batteries for the coming »beyond lithium"« era, which contain the more environmentally friendly sodium instead of lithium. However, such batteries are heavier and more suitable as low-cost intermediate storage for wind or solar power. The same applies to novel redox flow batteries that store electrical energy in two separate tanks of chemicals. Grey was also able to follow the processes in such liquid batteries »live« by means of her NMR studies and, among other things, ascertain the causes of the degradation processes. She is working on further optimising the NMR method in the future to design even more powerful, faster-charging and more environmentally friendly batteries.

In 2019, Grey cofounded a company for ultra fast-charging batteries that uses technology developed in its laboratories. Another company supplies the NMR measurement technology she designed to laboratories around the world. To achieve climate goals, Grey believes it is very important that »basic research into new battery technologies is already in full swing today – tomorrow is too late«.

The Körber European Science Prize 2021 will be presented to Clare Grey on 10 September in the Great Festival Hall of Hamburg City Hall. The Körber Prize, endowed with one million euros, is one of the world's most highly endowed research prizes. Five percent of the prize money is to be used for science communication. Every year since 1985, the Körber Foundation has honoured a major breakthrough in the physical or life sciences in Europe with the Körber Prize. It is awarded for excellent and innovative research approaches with high application potential. To date, six prize winners have also been awarded the Nobel Prize after receiving the Körber Prize.