Breaking ammonia: A new catalyst to generate hydrogen from ammonia at low temperatures 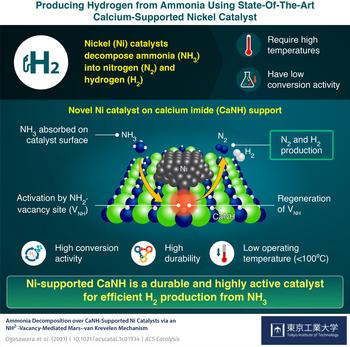 The current global climate emergency and our rapidly receding energy resources have people looking out for cleaner alternatives like hydrogen fuel. When burnt in the presence of oxygen, hydrogen gas generates huge amounts of energy but none of the harmful greenhouse gases, unlike fossil fuels. Unfortunately, most of the hydrogen fuel produced today comes from natural gas or fossil fuels, which ultimately increases its carbon footprint.

Ammonia (NH3), a carbon-neutral hydrogen compound has recently garnered a lot of attention owing to its high energy density and high hydrogen storage capacity. It can be decomposed to release nitrogen and hydrogen gases. Ammonia can be easily liquified, stored, and transported, and converted into hydrogen fuel when required. However, the production of hydrogen from ammonia is a slow reaction with very high energy demands. To speed up production, metal catalysts are often used, which help reduce the overall energy consumption during hydrogen production as well.

Recent studies have found that Nickel (Ni) is a promising catalyst for splitting ammonia. Ammonia gets adsorbed on the surface of Ni catalysts, following which the bonds between nitrogen and hydrogen in ammonia are broken and they are released as individual gases. However, obtaining a good conversion of ammonia using a Ni catalyst often involves very high operating temperatures.

In a recent study published in ACS Catalysis, a team of researchers from Tokyo Tech led by Associate Professor Masaaki Kitano described a solution to overcome the issues faced by Ni-based catalysts. They developed a state-of-the-art calcium imide (CaNH)-supported Ni-catalyst that can achieve good ammonia conversion at lower operating temperatures. Dr. Kitano explains, “Our aim was to develop a highly active catalyst that would be energy efficient. Our addition of the metal imide to the catalyst system not only improved its catalytic activity but also helped us unravel the elusive working mechanism of such systems.”

The team discovered that the presence of CaNH resulted in the formation of NH2- vacancies (VNH) on the surface of the catalyst. These active species resulted in the improved catalytic performance of the Ni/CaNH at reaction temperatures that were 100°C lower than those necessary for the functioning of Ni-based catalysts. The researchers also developed computational models and conducted isotope-labeling to understand what is happening on the catalyst surface. The calculations proposed a Mars−van Krevelen mechanism that involved adsorption of ammonia onto the CaNH surface, its activation at the NH2- vacancy sites, formation of nitrogen and hydrogen gas, and finally regeneration of vacancy sites promoted by Ni nanoparticles.

The highly active and durable Ni/CaNH catalyst can be successfully deployed for the generation of hydrogen gas from ammonia. Also, the insight into the mechanism of catalysis provided by this study can be utilized to develop a new generation of catalysts. “As the whole world is working together to build a sustainable future, our research is aimed at resolving the hiccups faced on our way to a cleaner hydrogen fuel economy,” concludes Dr. Kitano.