Batteries for transporting mobility into the future

High-​performance batteries are key to the comprehensive roll-​out of e-​mobility: ETH Pioneer Fellow Paul Baade is looking into how to manufacture them more cost-​effectively 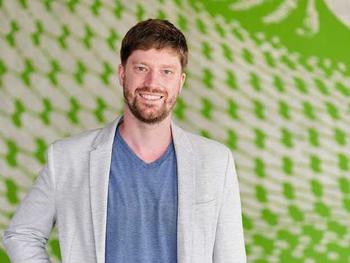 Paul Baade researches the production process of batteries at ETH's Center for Nanotechnology.

From 0 to 100 km/h in 2.6 seconds. Top speeds of 120 km/h. All powered by just one battery. This is “julier”, the first electric race car to win the Formula Student competition in 2013 against cars with traditional combustion engines. Paul Baade was one of the brains behind the battery back when he was a 22-​year-old mechanical engineering student at ETH Zurich. Baade and a team of ETH students spent a whole year working on and fine-​tuning their supercar, taking part in races across Europe and winning numerous prizes and awards.

“Our goal was to build the fastest car. The weight of the battery makes a huge difference,” says Baade as he reflects on the project. As an undergraduate student at the time, it quickly became clear to him that lithium-​ion batteries would be key to the future of e-​mobility. Today, the 30-​year-old from Germany is an ETH Pioneer Fellow researching how to manufacture high-​performance batteries more cost-​effectively. After all, electric cars are still too expensive to replace models with combustion engines entirely. And the most expensive component of all is the battery. “If we want to move private transport away from fossil fuels,” says Baade, “then we need cheaper and better batteries.”

The experience of taking part in Formula Studentcall_made, one of the biggest engineering competitions in the world, has had a lasting impact on Baade. Eight years later in his lab in Rüschlikon, he looks back on this time enthusiastically: “You’re in the workshop and get to turn your ideas into reality; you install parts which you designed yourself on the computer. I learned a lot back then.” But there’s one question that he can’t stop thinking about: How exactly do batteries work?

Then during his Master’s degree at ETH he began to look into the materials used in batteries more and more intensively. He studied micro-​ and nanotechnology to gain a better understanding of the inner workings of batteries. For his Master’s thesis, he switched to the renowned Lawrence Berkeley National Laboratory, where he researched the application of a special type of titanium dioxide as an anode material. He even built a battery with a glass window so that he could better observe and analyse the diffusion behaviour inside it, which would otherwise be difficult to discern.

It is this practical approach that sets Baade apart. During his studies he was always developing prototypes and experimental setups so that he could test and optimise conditions straight away. In doing so, his focus shifted more and more towards process engineering and its practical implementation. According to Baade, those who do not sufficiently acknowledge or understand this risk wasting their time slaving away on unrealistic ideas.

Baade returned to ETH in 2016 to undertake his doctoral studies at the Binnig and Rohrer Nanotechnology Center, which is run jointly by ETH Zurich and IBM in Rüschlikon, where he could work on the production of cost-​effective lithium-​ion batteries in even more depth. Alongside his supervisor Vanessa Wood, now Vice President for Knowledge Transfer and Corporate Relations at ETH, he has been developing a new manufacturing process for solid-​state batteries.

Baade’s main focus is on the coating process. He has built a miniature production facility in order to simulate and optimise real-​life conditions as accurately as possible. Baade uses his own testing facility to demonstrate how the coating speed can be doubled compared to that of typical industrial facility by applying thinner coats. This technology offers impressive potential: it can not only increase production by a factor of ten, thereby reducing production costs considerably, but it also shortens charging times as thinner coats enable faster charging.

But that’s not all: “Batteries with solid-​state electrolytes benefit the most from faster coating,” Baade explains. Today, most lithium-​ion batteries contain liquid electrolytes as these have greater conductivity. But at the same time they are more flammable. Baade’s faster coating technique can compensate for lower conductivity by applying thinner coats more quickly. This makes the battery not only more efficient and cost-​effective, but also safer.

From the lab to industry

But how would the high-​speed coating process fare outside the lab in a real production facility? This is the question that Paul Baade will be focusing on over the next couple of years as a Pioneer Fellow. “Our next step is to test the scalability of the production process using a pilot facility. That’s why we are currently looking for suitable partners,” the engineer adds.

Baade is optimistic that testing the production process on a pilot facility will lead to even better results: “We have already been able to produce batteries in our test facility under fairly realistic conditions. Our chances of success as we scale up are therefore considerably higher compared to normal lab tests.”