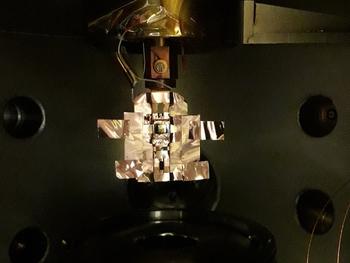 An international team has investigated a newly synthesized liquid-crystalline material that promises applications in optoelectronics. Simple rod-shaped molecules with a single center of chirality self-assemble into helical structures at room temperature. Using soft X-ray resonant scattering at BESSY II, the scientists have now been able to determine the pitch of the helical structure with high precision. Their results indicate an extremely short pitch at only about 100 nanometres which would enable applications with particularly fast switching processes.

Liquid crystals are not solid, but some of their physical properties are directional - like in a crystal. This is because their molecules can arrange themselves into certain patterns. The best-known applications include flat screens and digital displays. They are based on pixels of liquid crystals whose optical properties can be switched by electric fields.

Some liquid crystals form the so-called cholesteric phases: the molecules self-assemble into helical structures, which are characterised by pitch and rotate either to the right or to the left. "The pitch of the cholesteric spirals determines how quickly they react to an applied electric field," explains Dr. Alevtina Smekhova, physicist at HZB and first author of the study, which has now been published in Soft Matter.

In this work, she and partners from the Academies of Sciences in Prague, Moscow and Chernogolovka investigated a liquid crystalline cholesteric compound called EZL10/10, developed in Prague. "Such cholesteric phases are usually formed by molecules with several chiral centres, but here the molecule has only one chiral centre," explains Dr. Smekhova. It is a simple molecular chain with one lactate unit.

At BESSY II, the team has now examined this compound with soft X-ray light and determined the pitch and space ordering of the spirals. This was the shortest up-to-date reported value of the pitch: only 104 nanometres! This is twice as short as the previously known pitch of spiral structures in liquid crystals. Further analysis showed that in this material the cholesteric spirals form domains with characteristic lengths of about five pitches.

"This very short pitch makes the material unique and promising for optoelectronic devices with very fast switching times," Dr. Smekhova points out. In addition, the EZ110/10 compound is thermally and chemically stable and can easily be further varied to obtain structures with customised pitch lengths.