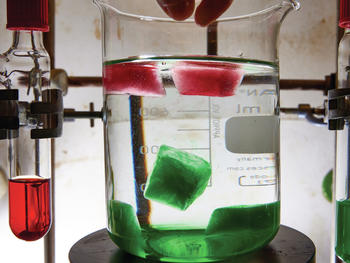 Illustrative experiment: The red cubes made of molded water ice float to the top normally. The green cubes of heavy water sink.

Researchers at the University of Bonn have presented a method that allows the heavier hydrogen "brother" deuterium to be introduced specifically into many different molecules. The deuterated compounds obtained in this way are more stable against degradation by certain enzymes. Drugs produced using this method can be effective for longer, meaning they have to be taken in lower doses or less frequently. The article has now been published in the journal "Angewandte Chemie".

Hydrogen (abbreviated "H") is the lightest of all elements. It usually consists only of a positively charged proton and a negatively charged electron and is also called protium in this form. But there are also two heavier hydrogen isotopes, deuterium and tritium. The deuterium nucleus contains one neutron in addition to the proton, in the case of tritium there are even two. Both are very rare; tritium is also - in contrast to deuterium and protium - radioactive.

Deuterium has been the focus of pharmaceutical research for some years, because it can ensure that drugs are broken down 5, 10 or even 50 times more slowly. "We call this the kinetic isotope effect," explains Prof. Dr. Andreas Gansäuer of the Kekulé Institute for Organic Chemistry and Biochemistry at the University of Bonn. The reason for this is that many reactions, including the degradation of active substances, do not occur spontaneously. They first need a slight "push", the activation energy. This is somewhat like getting a model car to roll over a hill: That too only works if the car has sufficient momentum. "If you replace hydrogen with deuterium, the activation energy usually increases somewhat," says Gansäuer. "As a result, reactions are slower. This also applies to the metabolism of pharmaceuticals in the liver."

This means that introducing deuterium instead of protium into drugs causes them to have a longer effect. They can therefore be taken in lower doses or less frequently. However, deuterium is rare and thus comparatively expensive. Consequently, deuterium should ideally only be introduced at the points where metabolization occurs primarily. This is where the new process comes in.

It is based on a class of substrates called epoxides, which can now be produced almost at will in many different ways. These groups can be visualized as a kind of "triangle" in which two corners are formed by carbon atoms and the third by an oxygen atom. Such three-membered rings are under great tension, which means they tear easily on one side. Epoxides therefore store energy like a taut spring, which can then be used for certain reactions.

"We introduced epoxides into different test molecules and then opened the strained ring with our catalyst," Gansäuer explains. "This contains a titanium atom to which deuterium is bonded." To put it figuratively, when the epoxy ring is cut open, two reactive ends are created. The catalyst binds to one of them, which then transfers the deuterium to the remaining free end in a second step. "This allows us to introduce a deuterium atom at a single location and with a very specific and desired spatial orientation," Gansäuer says. He is a member of the Transdisciplinary Research Area "Building Blocks of Matter and Fundamental Interactions" (TRA Matter) at the University of Bonn.

Another advantage of the method: For many complex molecules, there are two different ways of bonding that mirror each other. The new process can be used to create almost exclusively one of the two shapes. "Since compounds of mirror-image molecules are very difficult to separate and, moreover, they often have different properties in the human body, such stereoselectivity is very important," comments Gansäuer.

The method developed has been used, for example, to produce deuterated precursors of the painkiller ibuprofen and the antidepressant venlafaxine. The authors are confident that it will be applied to many more pharmaceuticals in the future.