A treasure map for the realm of electrocatalysts

Research into promising materials is hampered by the sheer number of possible candidates: An efficient method to solve this problem now developed 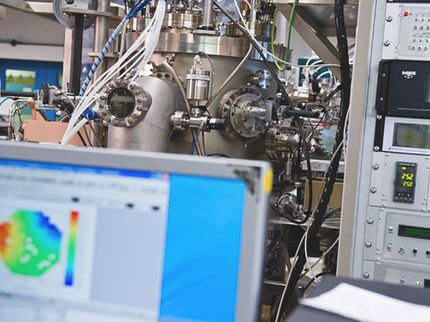 A view of the sputtering machine used to produce the material library counters.

Efficient electrocatalysts, which are needed for the production of green hydrogen, for example, are hidden in materials composed of five or more elements. A team from Ruhr-Universität Bochum (RUB) and the University of Copenhagen has developed an efficient method for identifying promising candidates in the myriad of possible materials. To this end, the researchers combined experiments and simulation.

Millions of systems are conceivable

High entropy alloys (HEAs) are chemically complex materials made up of mixtures of five or more elements. What’s interesting about them is that they offer completely new possibilities for the development of electrocatalysts. Such catalysts are urgently needed to make energy conversion processes more efficient, for example for the production and use of green hydrogen. “The problem with HEAs is that, in principle, millions of high-entropy systems are possible and each system involves tens of thousands of different compositions,” explains Professor Alfred Ludwig, who heads the Materials Discovery and Interfaces Chair at RUB. It is almost impossible to tackle such complexity using conventional methods and traditional high-throughput procedures.

The researchers describe a new method in their paper that should help to find promising high entropy alloys for electrocatalysis. In the first step, the team developed a way to produce as many potential compositions as possible. For this purpose, they used a sputtering system that simultaneously applies the five base materials to a carrier. “You can imagine this as five spray cans directed at one point on the target,” explains RUB researcher Dr. Lars Banko. This produces a very specific composition of the five source materials on each point of the carrier, so-called materials libraries. Since this composition is also affected by the position of the sources of the source materials, the research team modified them in the experiment. The materials libraries from the manufacturing processes with six different constellations of the sources were subsequently characterized using high-throughput measurements.

The RUB electrochemistry team then examined the materials libraries in this manner for their electrocatalytic activity.” This enables us to identify trends where possible promising candidates are located,” explains Dr. Olga Krysiak, who with Lars Banko is a lead author of the paper. The team matched this data from the experiment with a large simulation data set provided by the researchers at the University of Copenhagen in order to understand the composition of the materials in greater detail. The comparison between simulation and experiment enables the researchers to explore the atomic scale of electrocatalysts, to estimate the statistical arrangement of atoms on the material surface and to determine their influence on the catalytic activity.