Opportunities for a "new" chemistry 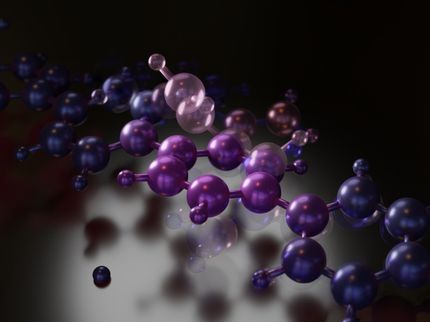 Artistic rendering of the 3+3-cycloaddition discovered at Empa's "nanotech@surfaces" laboratory.

Chemical synthesis on a gold surface: a hydrogen is abstracted from saturated isopropyl groups. The carbon atoms (red and blue in the picture above) combine to form a new benzene ring. A polymer chain is formed, visible in an atomic force microscope.

Chemical syntheses in liquids and gases take place in three-dimensional space. Random collisions between molecules have to result in something new in an extremely short time. But there is another way: on a gold surface under ultrahigh vacuum conditions, molecules lying still next to each other can be made to combine - even those that would never want to react with each other in a liquid. Researchers at Empa have now discovered such a reaction. Best of all, the experts can "take pictures" and watch every step of the reaction.

In chemistry, there are structures that are particularly stable, such as the so-called "benzene ring" consisting of six interconnected carbon atoms. Such rings form the structural basis for graphite and graphene, but they also occur in many dyes - such as the jeans dye indigo and in many drugs such as aspirin.

When chemists wanted to build such rings in a targeted manner, they used so-called coupling reactions, which usually bear the name of their inventors: for example, the Diels-Alder reaction, the Ullmann reaction, the Bergman cyclization or the Suzuki coupling. Now there is another one that does not yet have a name. It was discovered by a team from Empa together with the Max Planck Institute for Polymer Research in Mainz.

Everything in the dry

The Empa researchers omitted liquids in their chemical synthesis and instead attached the starting materials to a gold surface in an ultra-high vacuum. The starting material (diisopropyl-p-terphenyl) can be observed resting calmly in the cooled-down scanning tunneling microscope before the researchers turn up the heat.

Turn up the heating - movement on the dance floor

At room temperature, nothing happens yet, but at about 200 degrees Celsius, an amazing reaction occurs that would never happen in liquids: the two isopropyl groups – which are normally completely inactive from a chemical point of view – combine to form a benzene ring. The reason: due to the firm "adhesion" on the gold surface, a hydrogen atom is first loosened and then released from the molecule. This creates carbon radicals that are waiting for new partners. And there are many partners on the gold surface. At 200 degrees Celsius, the molecules vibrate and perform rapid pirouettes - there is a lot of movement on the golden dance floor. So what belongs together soon gets together.

And once again everything in slow motion

Matchmaking on the golden surface has two advantages. First, there is no need for coercion: the reaction takes place without mediating boric acids or halogen atoms flying away. It is a coupling involving only saturated hydrocarbons. The starting materials are cheap and easy to obtain, and there are no toxic byproducts.

The second advantage is that the researchers can watch every step of the reaction – another thing that is not possible with classical, "liquid" chemistry. The Empa team simply turns up the heating of the gold surface gradually. At 180 degrees Celsius, the molecules have only connected one arm with their neighbors, the second still protrudes freely into the dance floor. If one now cools down the gold surface inside a scanning tunneling microscope, one can view and "photograph" the molecules just before they are "married off." This is exactly what the researchers did. Thus, the reaction mechanism can been followed in the form of "snapshots."

Opportunities for a "new" chemistry

The researchers and their colleagues expect two kinds of effects to emerge from the current work. First, the "snapshot method" could also be suitable for elucidating completely different reaction mechanisms. At Empa, instruments are being developed that use ultrashort laser pulses in a scanning tunneling microscope to elucidate such chemical reactions step by step. This could provide additional insights into chemical reactions and soon shake up many an old theory.

However, the research results "from the dry" could also be useful to further develop "liquid" chemistry. So far, most of the reactions documented in the literature have come from classical liquid chemistry, and scanning probe researchers have been able to recreate these experiments. In the future, certain reactions could also be designed in the scanning tunneling microscope and later transferred to liquid or gaseous chemistry.