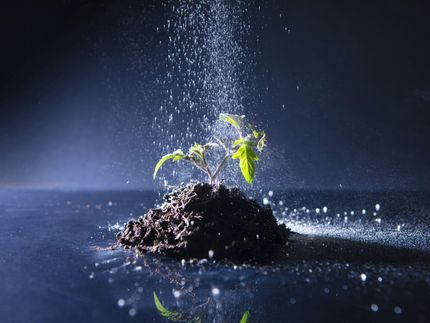 The co-crystals of the novel fertiliser (symbolised here with gypsum) release their nutrients much more slowly.

A purely mechanical method can produce a novel, more sustainable fertiliser in a less polluting way. That is the result of a method optimised at DESY's light source PETRA III. An international team used PETRA III to optimise the production method that is an adaptation of an ancient technique: by milling two common ingredients, urea and gypsum, the scientists produce a new solid compound that slowly releases two chemical elements critical to soil fertilisation, nitrogen, and calcium. The milling method is rapid, efficient, and clean—as is the fertiliser product, which has the potential to reduce the nitrogen pollution that fouls water systems and contributes to climate change. The scientists also found that their process is scalable; therefore, it could be potentially implemented industrially. The results by scientists from DESY; the Ruđer Bošković Institute (IRB) in Zagreb, Croatia; and Lehigh University in the USA have been published in the journal Green Chemistry. The new fertiliser still needs to be tested in the field.

For several years, scientists from DESY and IRB, have been collaborating to explore the fundamentals of mechanical methods for initiating chemical reactions. This method of processing, called mechanochemistry, uses various mechanical inputs, such as compressing, vibrating, or, in this case, milling, to achieve the chemical transformation. “Mechanochemistry is quite an old technique,” says Martin Etter, beamline scientist at the P02.1 beamline at PETRA III. “For thousands of years, we’ve been milling things, for example, grain for bread. It’s only now that we’re starting to look at these mechanochemical processes more intensively using X-rays and seeing how we can use those processes to initiate chemical reactions.”

Etter’s beamline is one of the few in the world where mechanochemistry can be routinely performed and analysed using X-rays from a synchrotron. Etter has spent years developing the beamline and working with users to fine-tune methods for analysing and optimising mechanochemical reactions. The result has been a globally renowned experiment setup that has been used in studying many types of reactions important to materials science, industrial catalysis, and green chemistry.

“In actuality, DESY’s mechanochemistry setup is likely the best in the world,” says Krunoslav Užarević of the IRB in Zagreb. “In few places can one monitor the progress of mechanochemical reactions as well as here at DESY. It would have been virtually impossible to accomplish this result without Martin Etter’s expertise and this PETRA III setup.”

For this result, the mechanochemistry collaboration teamed with Jonas Baltrusaitis, professor of chemical engineering at Lehigh University. The team used the P02.1 setup to gain insight into parameters governing the milling process, to optimize reaction conditions for preparing the target fertiliser. The setup at PETRA III allows for direct insight into the evolution of the reaction mixture by applying synchrotron radiation to the milling vessel. This means that the reaction can be observed without stopping the procedure. The researchers could thus determine the exact reaction pathways and analysed the output and purity of the product, which helped them refine the mechanical procedure on the fly. They found a procedure that enabled 100% conversion of the starting materials into the target fertiliser.

That end product is known as “cocrystal”, a solid with a crystal structure comprising two different chemicals that is stabilized by weaker intermolecular interactions in repeated patterns. “Cocrystals can be seen like LEGO structures,” says Etter. “You have sets of two kinds of two bricks, and with these two bricks you make a repeating pattern.” In this case, the “bricks” are calcium sulphate derived from the gypsum and the urea. Through the milling process, the urea and calcium sulphate become bonded to one another.

“On its own, urea makes for a very weakly bound crystal that falls apart easily and releases its nitrogen too readily,” says Baltrusaitis. “But with the calcium sulphate through this mechanochemical process, you get a much more robust cocrystal with a slow-release.” The advantage of this cocrystal is that its chemical bonds are weak enough to release nitrogen and calcium but strong enough to keep the two elements from being unleashed all at once.

That method of release is the grand advantage of the fertiliser. For one, they have avoided one of the major drawbacks of the nitrogen fertilisers in use since the 1960s. “The status quo in fertilisers, for food security reasons, is to dump as much nitrogen and phosphorus on crops as possible,” says Baltrusaitis. Over 200 million tonnes of fertiliser is produced via the more than a century-old Haber–Bosch process, which traps atmospheric nitrogen into urea crystals. Of this, only about 47 per cent is actually absorbed by the ground, with the rest washing away and causing potentially massive disruptions in water systems. In the North Sea and the Gulf of Mexico, massive “dead zones” are growing, wherein algal blooms fed by excess fertiliser absorb all the available oxygen in the water and thus kill sea life.

Additionally, production of common fertilisers is energy-intensive, consuming every year four percent of the global natural gas supply via the Haber–Bosch process. The new method provides an opportunity to reduce that dependence. “If you increase the efficiency of those urea materials by 50 per cent, you need to make less urea via Haber–Bosch, with all the related energy consumption issues such as natural gas demand,” says Baltrusaitis. The milling procedure is fast and very efficient, resulting in a pure fertiliser without any waste byproducts except water. “Not only are we proposing a better functioning fertiliser,” says Baltrusaitis, “we also are demonstrating a green method of synthesis.”

While the PETRA III analysis involved milligrams of fertiliser, the research team led by Baltrusaitis and Užarević have managed to scale their procedures up with help from the data taken at PETRA. Thus far, they can, with the same procedure and efficiency, produce hundreds of grams of fertiliser. As a next step, the team plans to continue scaling up, in order to make an actual proof-of-principle industrial version of the process. Baltrusaitis is already working on such a scale-up and testing of cocrystal fertiliser for application in real-world conditions.

“Beyond the product, the mechanochemical process generates virtually no unwanted byproducts or waste”, says Užarević from IRB. “We are optimistic there’s a strong application potential for it around the world.”

The Ruđer Bošković Institut in Zagreb, Croatia, the Lehigh University in Bethlehem (Pennsylvania) in the U.S., the chemical company ICL Group, the University of Zagreb and DESY participated in this research.