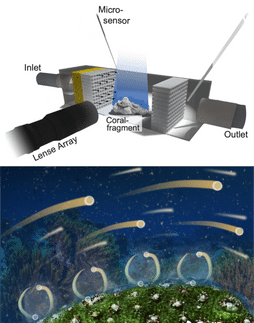 Watching corals breathe: A special camera records how oxygen sensitive particles flow past the coral surface. This allows the researchers to directly see the interaction between the flow field and oxygen concentration.

An international research team headed by the Max Planck Institute for Marine Microbiology in Bremen, Aarhus University and the Science for Life Lab in Uppsala has developed tiny particles that measure the oxygen concentration in their surroundings. In this way, they can track fluid flow and oxygen content at the same time – exciting prospects for many fields of research, from biology to physics.

The surface of a coral is rugged. Its hard skeleton is populated by polyps that stretch their tentacles into the surrounding water to filter out food. But how exactly does the water flow over the coral surface, what eddies and flows develop, and what does this mean for the oxygen supply around the coral and its associated algae? Until now, there was no answer to these questions. Now an international research team around Soeren Ahmerkamp from the Max Planck Institute for Marine Microbiology in Bremen, Klaus Koren from the Aarhus University in Denmark and Lars Behrendt from the Uppsala University and SciLifeLab in Sweden has developed a method that allows studying the flow and oxygen concentrations simultaneously at very small scales. Now it is possible to see how the corals generate a flow with their cilia, thus increasing oxygen transport.

Accurate and fast as never before

Oxygen and life are inextricably linked, from single cells to whole organisms. Across a few micrometers and within milliseconds, oxygen concentrations can change as a result of flow or organisms' activity. Existing methods typically measure oxygen concentrations and flows separately and, as a result, many correlations between these two parameters could not be detected. Ahmerkamp and his colleagues are now doing this in one fell swoop: They measure oxygen concentrations and flow simultaneously and with previously unattained accuracy and speed. The researchers named their newly developed method sensPIV. PIV is the abbreviation for "Particle Image Velocimetry", an established method for measuring flow with particles. Now the “sens” is added, the particles sense their chemical surroundings.

The work was a technical challenge. In fiddly detail, the team managed to produce tiny particles with a diameter of less than 1 micrometre, which are soaked in a luminescent dye (for comparison: A human hair has a diameter of about 100 micrometres). This dye glows brighter the less oxygen is present. “It was particularly important that the particles react very quickly to changes in oxygen concentrations. We also needed special cameras to accurately record the fluorescence,” explains co-author Farooq Moin Jalaluddin from the Max Planck Institute in Bremen. He adds, “With the sensPIV-method sensPIV we are able to resolve in rapid and small-scale fluid flows.”

Useful in medicine, biology, and much more

The possible applications of sensPIV are manifold. Many organisms interact with oxygen, and thus sensPIV can provide answers to open questions in life sciences. Ahmerkamp and his colleagues used it, for example, not only on corals, but also to take a detailed look at how oxygen flows through sand. Small-scale metabolic processes in microbes, animals and plants can also be studied in this way. Numerous other applications are arising in microfluidics, which examines how liquids behave in the smallest of spaces, and in medicine.

The first idea for this method came up already several years ago. "But it was only achievable through the great international team and our close cooperation that the idea has now turned into a functional and versatile application," says Ahmerkamp. Now the team is excited about the upcoming applications of the method. "The particles are not difficult to produce once you know how," says Klaus Koren. They are also thinking about further developing the method: "We would like to make sensPIV receptive to substances other than oxygen. Klaus is already working on it," adds Lars Behrendt.