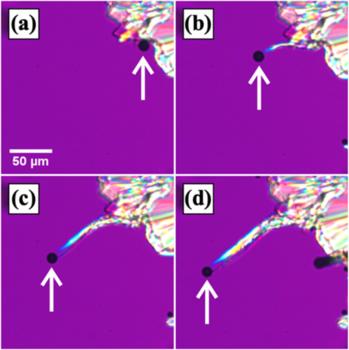 Polarizing microscope pictures over time of a whisker growing from a crystallizing front of o-terphenyl. It is seen to follow a spherical bubble into the liquid bulk.

Scientists from Tokyo Metropolitan University have discovered the mechanism behind the rapid growth of ultra-thin nanowires or “whiskers” in organic compounds. Nanowires are both a desirable technological innovation and a hazard when they short electronics: understanding how they grow is crucial for applications. Curiously, filaments were found to grow from large crystalline fronts by following bubbles of gas. Importantly, trace impurities could suppress bubble formation and whisker growth, allowing control over crystal structure.

Nanowires are ultra-thin filaments of crystalline material promising exciting new applications in electronics, catalysis, and energy generation. They may also grow spontaneously where they are not desired, bridging insulating barriers and shorting electronic circuits. Getting a handle on how they grow is an important technological problem, but the exact mechanism remains unknown.

A team consisting of Professor Rei Kurita, Assistant Professor Marie Tani and Takumi Yashima from Tokyo Metropolitan University have been looking at crystal growth in o-terphenyl and salol, both typical organic compounds that exhibit “whisker crystals”, the rapid growth of thin filaments from fronts of crystalline material when cooled. On close inspection, they discovered that each filament featured a tiny bubble at its tip. They succeeded in showing that this bubble wasn’t just an impurity or just mixed in air, but a tiny capsule of gas of the same organic compound. Instead of molecules in the liquid simply depositing onto a growing front like in normal crystal growth, it was transferring to the gas inside the bubble before being attached to the tip of the filament, a wildly different picture from the standard picture of freezing in liquids. This led to unprecedentedly fast growth which could also be reproduced inside thin glass capillaries for a more controlled growth of nanowires.

Addressing the bubble formation itself, the team found that the large density difference between crystal and liquid in these compounds had a role to play. Repeating the experiments in other liquids which didn’t have such a big difference, they found no whisker growth. They reasoned that the crystalline front was prone to be home to large density inhomogeneities, ultimately leading to cavitation, the spontaneous formation of bubbles of gas which go on to give birth to whiskers.

Having discovered what caused filament growth, the team set about getting some control over the phenomenon by suppressing bubble formation. They added a small amount of impurity into the material to suppress cavitation. Sure enough, as bubbles disappeared, so did the whiskers, allowing for the slower but whisker-free growth of large chunks of uniform crystalline material.

With unprecedented tunability and an understanding of the physics behind the process, the team’s work promises new approaches to grow nanofilaments for technological applications, and different strategies to safeguard electronics and batteries from potentially dangerous shorts triggered by whisker crystals.