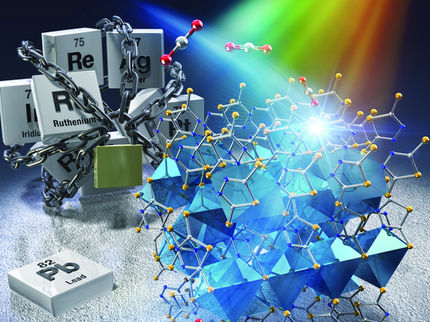 This scientific illustration of the study was selected as a Cover Picture in ACS Catalysis. 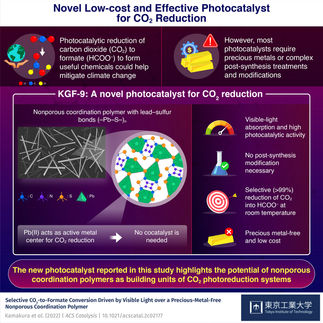 The carbon dioxide (CO2) released into the atmosphere during fossil fuel burning is a leading cause of global warming. One way to address this growing threat is to develop CO2 reduction technologies, which convert CO2 into useful chemicals, such as CO and formic acid (HCOOH). In particular, photocatalytic CO2 reduction systems use visible or ultraviolet light to drive CO2 reduction, much like how plants use sunlight to conduct photosynthesis. Over the past few years, scientists have reported many sophisticated photocatalysts based on metal-organic frameworks and coordination polymers (CPs). Unfortunately, most of them either require complex post-synthesis treatment and modifications or are made from precious metals.

In a recent study published in ACS Catalysis, a research team Japan found a way to overcome these challenges. Led by Specially Appointed Assistant Professor Yoshinobu Kamakura and Professor Kazuhiko Maeda from Tokyo Institute of Technology (Tokyo Tech), the team developed a new kind of photocatalyst for CO2 reduction based on a CP containing lead–sulfur (Pb–S) bonds. Known as KGF-9, the novel CP consists of an infinite (–Pb–S–)n structure with properties unlike any other known photocatalyst.

For instance, KGF-9 has no pores or voids, meaning that it has a low surface area. Despite this, however, it achieved a spectacular photoreduction performance. Under visible-light irradiation at 400 nm, KGF-9 demonstrated an apparent quantum yield (product yield per photon absorbed) of 2.6% and a selectivity of over 99% in the reduction of CO2 to formate (HCOO−). “These values are the highest yet reported for a precious metal-free, single-component photocatalyst-driven reduction of CO2 to HCOO−,” highlights Prof. Maeda. “Our work could shed light on the potential of nonporous CPs as building units for photocatalytic CO2 conversion systems.”

In addition to its remarkable performance, KGF-9 is easier to synthesize and use compared to other photocatalysts. Since the active Pb sites (where CO2 reduction occurs) are already “installed” on its surface, KGF-9 does not require the presence of a cocatalyst, such as metal nanoparticles or metal complexes. Moreover, it requires no other post-synthesis modifications to operate at room temperature and under visible light illumination.

The team at Tokyo Tech is already exploring new strategies to increase the surface area of KGF-9 and boost its performance further. As the first photocatalyst with Pb(II) as an active center, there is a good chance that KGF-9 will pave the way to a more economically feasible CO2 reduction. In this regard, the research team concludes: “We believe that our study provides an unprecedented opportunity for developing a new class of inexpensive photocatalysts for CO2 reduction consisting of earth-abundant elements.”