How do molecular motors convert chemical energy in to mechanical work?

Researchers reveal structure and function of a complex micro machine 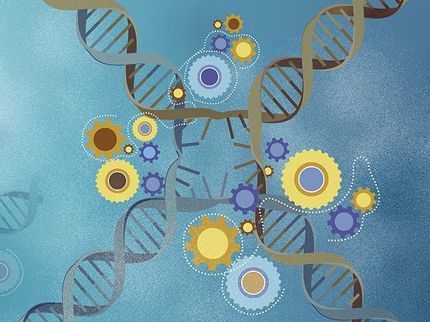 Artistic representation of the Holliday junction and the RuvB motors.

Molecular motors are complex devices composed of many different parts that consume energy to perform various cellular activities. In short, molecular machines transform energy into useful work. Understanding the mechanistical aspects underlying these motors begins with generating a detailed description of their overall architecture and atomic organisation. However, to uncover the core mechanisms energizing these motors it is essential to decode all of the molecular dynamics in atomic detail.

Now, the research team of Thomas C. Marlovits from the Centre for Structural Systems Biology CSSB at DESY and the University Medical Center Hamburg-Eppendorf (UKE) in Hamburg reveals the architecture, complete functional cycle and the mechanism of such a molecular motor: They report in the journal Nature, how a ‘RuvAB branch migration complex’ converts chemical energy into mechanical work to perform recombination and repair of DNA.

DNA recombination is one of the most fundamental biological processes in living organisms. It is the process by which chromosomes “swap” DNA either to generate genetic diversity, by creating new offspring, or to maintain genetic integrity, by repairing breaks in existing chromosomes. During DNA recombination, four DNA arms separate from their double-helix formations and join together at an intersection known as a Holliday junction. Here the DNA arms exchange strands in a process called active branch migration.

The essential energy needed for this branch migration to occur comes from a molecular machinery that scientists have tagged as the RuvAB branch migration complex. This complex assembles around the Holliday junction and is made of two motors labelled RuvB AAA+ ATPases, that fuel the reaction, and a RuvA stator. The research team has now provided an intricate blueprint that explains how the RuvB AAA+ motors work under the regulation of the RuvA protein to perform synchronized DNA movement.

The active branch migrations energized by the RuvB AAA+ motor molecule are very fast and highly dynamic. To determine the individual steps of this process, the scientists used time-resolved cryo electron microscopy to observe the motor’s machinery in slow motion. “We basically provided the RuvB AAA+ motor with a slower burning fuel which allowed us to capture the biochemical reactions as they occur,” explains Marlovits.

The scientist captured over ten million images of the motor machinery interacting with the Holliday junction. Jiri Wald (CSSB, UKE and part of the Vienna BioCenter PhD Program), the paper’s first author, combed through the immense amount of data and carefully classified the subtle changes occurring in each image. Using the high-performance computing facility at DESY, the scientists were then able to put all the puzzle pieces together to generate a high-resolution movie detailing how the RuvAB complex functions on the molecular scale.

“We were able to visualize seven distinct states of the motor and demonstrate how the interconnected elements work together in a cyclical manner,” explains Wald. “We also demonstrated that the RuvB motor converts energy into a lever motion which generates the force that drives branch migration. We were amazed by the discovery that the motors use a basic lever mechanism to move the DNA substrate. Overall, the sequential mechanism, coordination and force generation manner of the RuvAB motor share conceptual similarities with combustion engines.”

AAA+ motors are often used in other biological systems, such as protein transport, therefore this detailed model of the RuvB AAA+ motor can be used as a blueprint for similar molecular motors. “We understand how the motor works and now we can put this motor into another system with some minor adaptations,” explains Marlovits. “We are essentially presenting core principles for AAA+ motors.”

The Marlovits group’s future work will explore ways to interfere with the function of AAA+ motors. This could provide the basis for the development of a new generation of drugs, which would disrupt the mechanisms of such a motor in pathogens and thus halt the spread of infection. “We are excited to explore the possibilities that exist now that we have a blueprint of the RuvB AAA+ motor,” notes Wald.