The Grotthuss Mechanism is revealed to intimately involve not one, two, or four molecules, as was suggested for more than 100 years of modern research, but a unique arrangement of three water molecules 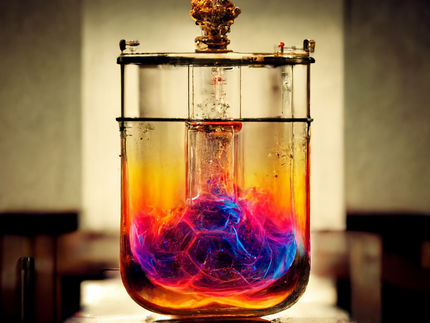 Prof. Ehud Pines is an iconoclast. What else can you call a scientist who spent 17 years doggedly pursuing the solution to an over 200-year-old chemistry problem which he felt never received a satisfying answer using methods no other scientist thought could lead to the truth? Now, he is vindicated as the prestigious Angewandte Chemie journal published a cover article detailing how his experiment was replicated by another research group while being x-rayed to reveal the solution Prof. Pines has argued for all along.

The question at hand is: How does a proton move through water? In 1806, Theodor Grotthuss proposed his theory, which became known as the Grotthuss Mechanism. Over the years, many others attempted an updated solution realizing that, strictly speaking, Grotthuss was incorrect, but it remained the standard text-book answer. Until now.

Prof. Ehud Pines suggested, based on his experimental studies at Ben-Gurion University of the Negev, together with his PhD student Eve Kozari, and theoretical studies by Prof. Benjamin Fingerhut on the structure of Prof. Pines' protonated water clusters, that the proton moves through water in trains of three water molecules. The proton train "build the tracks" underneath them for their movement and then disassemble the tracks and rebuild them in front of them to keep going. It's a loop of disappearing and reappearing tracks which continues endlessly. Similar ideas were put forward by a number of scientists in the past, however, according to Prof. Pines, they were not assigned to the correct molecular structure of the hydrated proton which by its unique trimeric structural properties leads to promoting the Grotthuss mechanism.

"The debates on the Grotthuss mechanism and the nature of proton solvation in water have grown heated," says Prof. Pines, "as this is one of the most basic challenges in chemistry. Understanding this mechanism is pure science, pushing the boundaries of our knowledge and changing one of our fundamental understandings of one of Nature's most important mass and charge transport mechanisms."

While in recent years additional theoretical studies confirmed Prof. Pines' findings of the hydrated proton accommodated by a chain of three water molecules, most of the global scientific community working in the field remained reluctant to accept Prof. Pines' emerging model for proton solvation and movement in water. So, Prof. Pines reached out to longtime collaborators at the Max Born Institute in Germany. They put together an international research team organized by Dr. Erik Nibbering and replicated the experiment, this time X-raying the chemical system. The X-ray experiment – which required specially designed equipment costing millions of dollars financed by the European Research Council – confirmed Prof. Pines' findings. The X-ray absorption (XAS) experiment measured the effect of the proton charge on the structure of the inner electrons of the waters’ single oxygen atoms. As predicted by Prof. Pines, it was found that three water molecules are most affected by the presence of the proton, each to a different extent, and, together with the proton, form protonated 3-water molecules chains or "trains".

"Everyone thought about this problem for over 200 years, so that was a sufficient challenge to me to decide to take it up. Seventeen years later, I am gratified to most likely have found and demonstrated the solution," says Prof. Pines.

The next edition of college chemistry books may replace the description of the Grotthuss Mechanism with the "Pines Mechanism", an idea which tickles Prof. Pines, but is merely a curio compared to the revelation of understanding this basic mechanism of one of the most common and fundamental processes in Nature.

Ben-Gurion University of the Negev