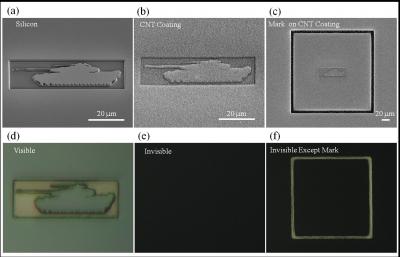 Scanning electron microscope images show a tank etched out of silicon, with and without a carbon nanotube coating (top row). When the same structures are viewed under white light with an optical microscope (bottom row), the nanotube coating camouflages the tank structure against a black background.

Carbon nanotubes, tiny cylinders composed of one-atom-thick carbon lattices, have gained fame as one of the strongest materials known to science. Now a group of researchers from the University of Michigan is taking advantage of another one of carbon nanotubes' unique properties, the low refractive index of low-density aligned nanotubes, to demonstrate a new application: making 3-D objects appear as nothing more than a flat, black sheet.

The refractive index of a material is a measure of how much that material slows down light, and carbon nanotube "forests" have a low index of refraction very close to that of air. Since the two materials affect the passage of light in similar ways, there is little reflection and scattering of light as it passes from air into a layer of nanotubes.

The Michigan team realized they could use this property to visually hide the structure of objects. As described in the AIP's journal Applied Physics Letters, the scientists manufactured a 3-D image of a tank out of silicon. When the image was illuminated with white light, reflections revealed the tank's contours, but after the researchers grew a forest of carbon nanotubes on top of the tank, the light was soaked up by the tank's coating, revealing nothing more than a black sheet.

By absorbing instead of scattering light, carbon nanotube coatings could cloak an object against a black background, such as that of deep space, the researchers note. In such cases the carbon nanotube forest "acts as a perfect magic black cloth that can completely conceal the 3-D structure of the object," the researchers write.