Graphene flakes as an ultra-fast stopwatch

Researchers from the USA and Dresden develop graphene broadband detector 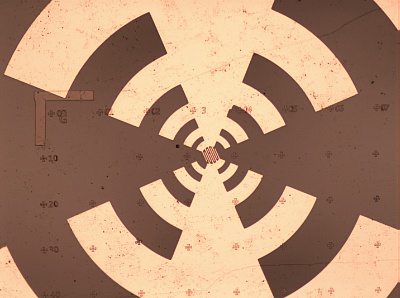 The external antenna on the detector captures long-wave infrared and terahertz radiation and funnels it to a graphene flake which is located in the center of the structure on a silicon carbide substrate.

Scientists at the Helmholtz-Zentrum Dresden-Rossendorf (HZDR), working with colleagues from the USA and Germany, have developed a new optical detector from graphene which reacts very rapidly to incident light of all different wavelengths and even works at room temperature. It is the first time that a single detector has been able to monitor the spectral range from visible light to infrared radiation and right through to terahertz radiation. The HZDR scientists are already using the new graphene detector for the exact synchronization of laser systems.

A tiny flake of graphene on silicon carbide and a futuristic-looking antenna, and there it is – the new graphene detector. Like no other single detector system which has gone before, this comparatively simple and inexpensive construct can cover the enormous spectral range from visible light all the way to terahertz radiation. "In contrast to other semiconductors like silicon or gallium arsenide, graphene can pick up light with a very large range of photon energies and convert it into electric signals. We only needed a broadband antenna and the right substrate to create the ideal conditions," explained Dr. Stephan Winnerl, physicist at the Institute of Ion Beam Physics and Materials Research at the HZDR.

Back in 2013 Martin Mittendorff, who was a PhD student at the HZDR at that time, had developed the precursor to the graphene detector. In his present position as a postdoc at the University of Maryland, he has now perfected it with his Dresden colleagues and with scientists from Marburg, Regensburg and Darmstadt. How it works: the graphene flake and antenna assembly absorbs the rays, thereby transferring the energy of the photons to the electrons in the graphene. These "hot electrons" increase the electrical resistance of the detector and generate rapid electric signals. The detector can register incident light in just 40 picoseconds – these are billionths of a second.

The choice of substrate has now proved a pivotal step in improving the little light trap. "Semiconductor substrates used in the past have always absorbed some wavelengths but silicon carbide remains passive in the spectral range," explained Stephan Winnerl. Then there is also an antenna which acts like a funnel and captures long-wave infrared and terahertz radiation. The scientists have therefore been able to increase the spectral range by a factor of 90 in comparison with the previous model, making the shortest detectable wavelength 1000 times smaller than the longest. By way of comparison, red light, which has the longest wavelength visible to the human eye, is only twice as long as violet light which has the shortest wavelength on the visible spectrum.

This optical universal detector is already being used at the HZDR for the exact synchronization of the two free-electron lasers at the ELBE Center for High-Power Radiation Sources with other lasers. This alignment is particularly important for "pump probe" experiments, as they are called, where researcher take one laser for the excitation of a material ("pump") and then use a second laser with a different wavelength for the measurement ("probe"). The laser pulses must be exactly synchronized for such experiments. So the scientists are using the graphene detector like a stopwatch. It tells them when the laser pulses reach their goal, and the large bandwidth helps to prevent a change of detector from being a potential source of error. Another advantage is that all the measurements can take place at room temperature, obviating the need for the expensive and time-consuming nitrogen or helium cooling processes with other detectors.