Uncovering the secrets of ice that burns 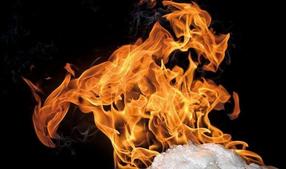 Methane hydrates are extremely difficult to study, and could either be an important energy source or a source of methane, a greenhouse gas that is 20 times more potent than CO2. These reasons led a Norwegian, Dutch and Chinese research team to explore the mechanical properties of this poorly understood substance.

A team of scientists from Norway, China and the Netherlands has shown how the size of grains of the molecules that make up the natural structure of methane hydrates determines how they behave if they are loaded with weight or disturbed.

"If we have basic knowledge about the mechanical properties of methane hydrates, we can use this information so that we manage them properly," Zhiliang Zhang, a professor at the Norwegian University of Science and Technology said. "How methane hydrates behave can have a big impact on safety, environmental issues and climate change."

When methane hydrates "melt", they release the methane trapped inside the ice, but because the methane was first trapped under pressure when the hydrate was formed, one cubic metre of solid methane hydrate will release 160 cubic metres of methane gas. That makes them either a potent energy source, or if they melt as the permafrost melts, a potent source of methane, which will act as a greenhouse gas.

But mining methane hydrates as an energy source, an option that is being explored by Japan among others, is technically difficult. Their location on the soft, sediment-loaded edges of the continental shelves makes them difficult to mine, and when they are disturbed, their crystal structure may suddenly dissociate and release the methane trapped inside.

Researchers at NTNU's Nanomechanical Lab and from the university's Department of Chemistry and their collaborators in China and the Netherlands are interested in understanding the relation between molecular structures and the mechanical stability of materials. Methane hydrates, with their ice lattice structure containing trapped molecules of methane, pose an intriguing three-dimensional and practical problem from this perspective.

The researchers built their computer models using common molecular models for ice/water and methane, arranged as either monocrystalline or polycrystalline grains, and simulated the effect of applying forces to the collection of grains.

The simulations showed that the size of the crystals--what researchers call the grain size--that made up the hydrate structure had a great deal to say in terms of how the structure reacted to both kinds of stresses.

In both tensile and compression stress simulations, the surprising finding was that as the grain size got smaller, the hydrates first got stronger, able to tolerate both compression and tensile stress--but only until they reached a certain grain size. If the researchers conducted simulations on grain sizes smaller than those identified as the turning point, the hydrate actually got weaker.

The maximum capacity of the hydrates appears when the grain size is around 15 to 20 nm. This resembles the behaviour of polycrystalline metals, such as copper. However, this is the first time that researchers have seen this type of behaviour in methane hydrates as a material. The grain size-dependent strength and maximum capacity that the researchers found can be used in predicting and preventing the failure of hydrates in the future.

Instability can be triggered

This unexpected rapid weakening of the crystal structure as the grain size gets smaller has important implications for any work in areas where hydrates are found.

The researchers reported that the dissociation of methane hydrates can be triggered by the ground deformation caused by "earthquakes, storms, sea-level fluctuations or man-made disturbances (including well drilling and gas production from hydrate reservoirs)."

"This has an impact on these big issues," Zhang said. "Here we have taken one step forward, but of course there is a lot more work to be done."