Microplastics: Rhine one of the most polluted rivers worldwide

Between Basel and Rotterdam, the Rhine has one of the highest microplastics pollution so far 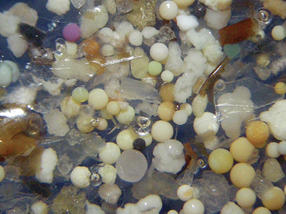 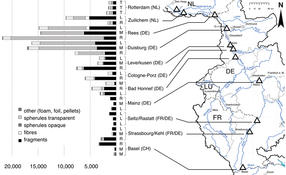 The number of microplastics on the surface per 1000 cubic meters according to sampling locations and categories (transparent and opaque spherules, fibers, fragments as well as foam, foil and pellets). Sampling locations across the river: R = right, M = middle, L = left in direction of flow, T = measurement along a line (transect) with hauler.

Tiny plastic particles smaller than five millimeters, so-called microplastics, are found in almost all waterbodies these days. They occur as intermediate products in plastic production or as pellets for cleansing and care products or result from fragmentation of plastic debris. They are released into the environment due to improper handling. In the oceans, they contribute to the ‘great garbage patches’ and are ingested by many organisms, from protozoa to baleen whales. Although as much as 80% of this marine plastic is emitted by rivers to the oceans, not a single great river has yet been scientifically studied for the microplastics load over its length.

For the first time, environmental scientists from the University of Basel have now reported the abundance and composition of microplastics at the surface of the Rhine between Basel and Rotterdam. They took 31 water samples at 11 locations over a stretch of 820 kilometers. Microplastics were found in all samples in different concentrations, with an average of 892,777 particles per square kilometer (or 4,960 particles per 1000 cubic meters).

The findings reflect the major potential sources of environmental pollution along the Rhine, such as metropolitan areas and industrial plants, waste water treatment plants and weirs, as well as the particular current conditions. The minimum average microplastics pollution was found in the stretch between Basel and Mainz (202,900 particles per square kilometer), a medium average at Bad Honnef, Köln-Porz and Leverkusen (714,053) and the highest average in the Rhine-Ruhr metropolitan area (2,333,665). A peak microplastics concentration was measured at Rees on the Nederhijn, where 3.9 million plastic items per square kilometer (or 21,839 particles per 1000 cubic meters) were found in a single water sample.

“The Rhine's microplastics concentrations are thus among the highest so far studied worldwide”, says biologist Professor Patricia Holm from the Department of Environmental Sciences at the University of Basel. For the most polluted Swiss lakes, Lake Geneva and Lake Maggiore, 220,000 particles per square kilometer were reported in other studies. As a further example, in Lake Erie in the U.S., only 105,503 items per square kilometer were found. Significantly less microplastics were also found in the river Rhone near Geneva. In general, extreme peaks may be reached after heavy rain or accidents.

“Our results show that the Rhine is significantly polluted with microplastics”, says Holm. ”If we assume an average microplastics concentration on the day we took the water sample in Rees, we can say that the Rhine contributes a daily load of more than 191 million plastic particles to the North Sea, and that only takes into account the surface. Even though, in terms of weight, this only corresponds to roughly 25 to 30 kilos a day, this adds up to 10 tons a year. Each one of these billions of plastic items can be ingested by organisms and have negative effects on their health.”

The scientists concentrated on the detection of microplastics found in large numbers in production worldwide and of low specific density, such as polyethylene, polypropylene and polystyrene. The types of plastics are used in the plastic industry e.g. for packaging, office equipment and vehicle construction and float on the water surface for long distances. Samples were mostly taken from boats of the Rhine Police Basel-Stadt and the Waterways and Shipping Administration in Germany and the Netherlands.

The researchers found microplastics in the shape of opaque and transparent spherules as well as of fragments and fibers. “The extremely high proportion of more than 60 percent spherules in certain parts of the river is striking. Where they come from and what their former use was, is largely unclear so far”, says Thomas Mani, first author of the study and PhD student at the Department of Environmental Sciences of the University of Basel.