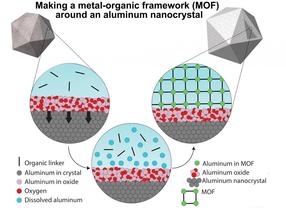 A graphic illustrating the synthesis method that begins with oxide-covered aluminum nanocrystals (top left) and ends with the nanocrystal encased in metal-organic framework (MOF). The MOF self-assembles around the particle when the oxide partially dissolves, releasing aluminum ions that bind with organic linkers to form a 3D framework.

When Rice University chemist and engineer Hossein Robatjazi set out to marry a molecular sieve called MOF to a plasmonic aluminum nanoparticle two years ago, he never imagined the key would be the same process nature uses to petrify wood.

In a new paper Robatjazi and co-authors with Rice's Laboratory for Nanophotonics (LANP) describe how pseudomorphic replacement, the same chemical process that turns a tree to stone, aided their synthesis of the first metal-organic framework (MOF) around light-powered aluminum nanocatalysts.

Catalysts are materials that speed up chemical reactions without reacting themselves, and they're used in the manufacture of most commercially produced chemicals. Because most industrial catalysts work best at high temperature or high pressure or both, they also come with an enormous energy burden. The combination of MOFs and plasmonic aluminum creates a new avenue for designing greener catalysts that use solar energy and are made from the most abundant metal in Earth's crust.

In the study, Robatjazi, LANP Director Naomi Halas and colleagues performed a proof-of-principle demonstration of a process known as the reverse water-gas shift reaction at ambient temperature and pressure under laboratory conditions that simulated sunlight. The reaction transforms carbon dioxide (CO2) and hydrogen gas into carbon monoxide -- a feedstock for chemical manufacturing -- and water.

"This is the first example showing that you can combine MOF and aluminum particles to do this reaction with light," said Robatjazi, a graduate student at LANP, the Rice lab that has pioneered plasmonic technologies for applications as diverse as cancer diagnosis and treatment, MRI contrast agents and solar water distillation.

Plasmons are waves of electrons that slosh across the surface of tiny metal nanoparticles, and by varying a plasmonic nanoparticle's shape and size, LANP scientists can tune it to interact with and harvest energy from light. In previous research, LANP demonstrated copper nanocatalysts for making clean-burning hydrogen from ammonia, and aluminum-based antenna-reactors for making ethylene, the chemical feedstock for polyethylene, the world's most common plastic.

Halas said the latest work with MOFs is important for several reasons.

"We've shown that growing MOFs around aluminum nanocrystals enhances the photocatalytic activity of the aluminum particles and also provides us a new way of controlling the size, and therefore the plasmonic characteristics, of the particles themselves," Halas said. "Finally, we've shown that the same basic method works for making different kinds of MOFs."

MOFs are three-dimensional structures that self-assemble when metal ions interact with organic molecules called linkers. The structures are highly porous, like a sponge or Swiss cheese. Just a gram of some MOFs have a surface area larger than a football field, and by varying the type of metal, the linker and reaction conditions, chemists can design MOFs with different structures, pore sizes and functions, like trapping specific molecules. More than 20,000 kinds of MOFs have been made.

In Robatjazi's initial experiments, he attempted to grow MIL-53, a well-studied MOF that's noted for its CO2-trapping ability. He tried synthesis methods that had worked for growing MOFs around gold particles, but they failed for aluminum, and Robatjazi suspected aluminum oxide was to blame.

Unlike gold, aluminum is highly reactive with oxygen, and every aluminum nanoparticle instantly becomes covered with a thin 2- to 4-nanometer sheen of aluminum oxide the moment it comes in contact with air.

"It's amorphous," Robatjazi said. "It's not like a flat surface with a well-defined crystallinity. It's like a bumpy road, and the MOF crystals could not make a structure on that surface."

In looking at the chemical literature, Robatjazi got the idea to let pseudomorphic mineral replacement do the work of both preparing the surface of the particles to accept MOFs and providing the metal building blocks for MOFs.

"We learned from Mother Nature, and we basically use the same strategy because aluminum oxide is a mineral," he said. "Normally for MOFs, we mix a metal ion with the organic linker, and in this case we eliminated the metal ion and instead dissolved the aluminum oxide and used the aluminum ions from that reaction as metal components of our MOF."

By varying the reaction conditions, Robatjazi found he could control how much of the aluminum surface he etched away, and thus control the final size -- and plasmonic properties -- of the plasmonic particle inside. For MIL-53, the CO2-trapping MOF, he showed that the catalytic activity of the plasmonic aluminum nanocrystal increased substantially when the MOF was in place.

Finally, he demonstrated he could use the same etching method with different linkers, making MOFs with varied pore sizes and other properties, including a hydrophilic variety that kept water away from the aluminum particle within.

"We're exploring avenues to tune the characteristics of aluminum-MOF structures, either by synthetic variation or post-synthesis modification," Halas said. "That flexibility could open a range of opportunities for scaling up plasmon-mediated chemical reactions that are both less expensive for industry and better for the environment."