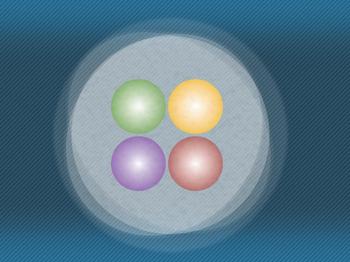 The new particle is the first tetraquark to contain four quarks of different "flavors."

Research led by Indiana University physicist Daria Zieminska has resulted in the first detection of a new form of elementary particle: the "four-flavored" tetraquark.

Zieminska, a senior scientist in the IU Bloomington College of Arts and Sciences' Department of Physics, is a lead member of the team responsible for the particle's detection by the DZero Collaboration at the U.S. Department of Energy's Fermi National Laboratory, which announced the discovery.

"For most of the history of quarks, it's seemed that all particles were made of either a quark and an antiquark, or three quarks; this new particle is unique -- a strange, charged beauty," said Zieminska, who has been a member of the DZero experiment since the project's establishment in 1985. "It's the birth of a new paradigm. Particles made of four quarks -- specifically, two quarks and two antiquarks -- is a big change in our view of elementary particles."

The results could also affect scientists' understanding of "quark matter," the hot, dense material that existed moments after the Big Bang, and which may still exist in the super-dense interior of neutron stars.

Quarks are the building blocks that form subatomic particles, the most familiar of which are protons and neutrons, each composed of three quarks. There are six types, or "flavors," of quarks: up, down, strange, charm, bottom and top. Each of these also has an antimatter counterpart.

A tetraquark is a group of four quarks, the first evidence for which was recorded by scientists on the Belle experiment in Japan in 2008. But the new tetraquark is the first quark quartet to contain four different quark flavors: up, down, strange and bottom.

Currently, Zieminska leads the "heavy flavor" group of the DZero experiment, which encompasses the study of all particles containing one or more "heavy quarks," including the new tetraquark, dubbed X(5568) for its mass of 5568 Megaelectronvolts, roughly 5.5 times the mass of a proton. The DZero experiment is led by Dmitri Denisov, a staff scientist at the U.S. Department of Energy's Fermilab.

"Daria was the lead person on the tetraquark observation and performed calculations, cross-checking and other work required to answer the hundreds of questions of the rest of the team," said Denisov, co-spokesman for the DZero experiment. "She was an active participant in the design and construction of the experiment and in the collection of the data."

The DZero experiment is also responsible for other fundamental physics discoveries, including the first observation, with the Collider-Detector at Fermilab experiment, of the elusive Higgs boson particle decaying into bottom quarks.

Other IU scientists engaged in the DZero project include the late Andrzej Zieminski, former professor of physics at IU Bloomington, who also joined the project in 1985, and Rick Van Kooten, IU vice provost for research, who joined in 2002 during "phase 2" of the project, which involved upgrades to the detector partially constructed at IU. Hal Evans, professor, and Sabine Lammers, associate professor, both at IU, also contributed to the upgraded detector.

DZero is one of two experiments collecting data from Fermilab's Tevatron proton-antiproton collider, once the most powerful particle accelerator in the world, officially retired in 2011. Zieminska and colleagues uncovered the existence of X(5568) based on analysis of billions of previously recorded events from these collisions.

As with other discoveries in physics, Zieminska said the new tetraquark's discovery was a surprise. Alexey Drutskoy, a colleague at Russia's National Research Nuclear University, spotted indications of the tetraquark signal in summer 2015, after which Zieminska joined him in the hunt. Only after performing multiple cross-checks, in collaboration with Alexey Popov, another Russian colleague, did the team confirm they were observing evidence for a new particle.

Although nothing in nature forbids the formation of a tetraquark, four-quark states are rare and not nearly as well understood as two- and three-quark states. Zieminska and colleagues plan to deepen their understanding of the tetraquark by measuring various properties of the particle, such as the ways it decays or how much it spins on its axis.

The discovery of the tetraquark also comes on the heels of the first observation of a pentaquark -- a five-quark particle -- announced last year by CERN's LHCb experiment at the Large Hadron Collider.