Calcium isotope holds the secret to the mass of neutrinos 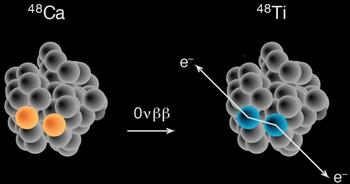 In the neutrinoless double-beta decay of calcium-48 into titanium-48, two neutrons are lost, two protons are gained and two electrons are emitted. Neutrinos do not appear but form an "internal" part of the process.

Scientists around the world are being kept in suspense by the negligible mass of neutrinos, subatomic particles that could be matter and antimatter at the same time. Now, researchers from the University of Tokyo, in collaboration with a Spanish physicist, have used one of the world's most powerful computers to analyse a special decay of calcium-48, whose life, which lasts trillions of years, depends on the unknown mass of neutrinos. This advance will facilitate the detection of this rare decay in underground laboratories.

Neutrinos were discovered more than 60 years ago; however, scientists are yet to discover some of their fundamental properties, such as their mass (for which only the upper limit is known; this is around 3.6 x 10-36 kg), or whether neutrinos and antineutrinos are in fact the same particle.

An experiment that may offer an answer to the first of these questions is the so-called neutrinoless double beta decay. This occurs when an atom's parent nucleus decays into a daughter nucleus, gaining two protons, losing two neutrons and emitting two electrons. One example of this is the decay of calcium-48 (a very rare isotope of calcium with 20 protons and 28 neutrons) into titanium-48. This is the process that has now been analysed and modelled in unprecedented detail by scientists from the University of Tokyo (Japan).

"The half-life of this decay depends on two factors: the unknown mass of neutrinos (which are part of the process, even though none are emitted) and the characteristics of the parent and daughter nuclei. This implies that, knowing these nuclear characteristics, and once this decay has been measured experimentally in one of the underground laboratories working on it, it will be possible to determine the mass of neutrinos," SINC was told by Javier Menéndez, a Spanish researcher at the Japanese university and one of the study's co-authors.

The team's achievement has been understanding the nuclear part "in a reliable way" through extremely complex quantum mechanics calculations. These included as variables two thirds of the many protons and neutrons involved (to date, scientists had only managed to introduce one third of these particles) using matrices containing 2 trillion pieces of data. These operations were run using the world's fourth fastest supercomputer, the K-computer at Kobe's RIKEN Institute.

"Our findings will make it possible to directly obtain neutrino mass when the half-life of this decay is measured experimentally," says Menéndez. "Moreover, they suggest that the decay of calcium-48 is around half as long as what was previously thought (2 x 1025 years, rather than 4 x 1025 years). This improves our chances of observing it."

In any case, this is an extremely rare and slow decay, as it is mediated by two simultaneous weak decay processes. This means that it takes trillions of years to occur and is very difficult to detect. Laboratories working on this subject hope to observe one (which is due to decay very soon) in deep underground mines, far from any external "noise". Among the experiments trying to achieve this are CANDLES in the Japanese Kamioka Observatory (one of the winners of the Breakthrough Prize for Fundamental Physics for its research on neutrinos) and NEMO III in the Fréjus tunnel (France).

After presenting their findings with calcium-48 (the easiest of the candidate nuclei to analyse), the researchers are now working on similar calculations for the neutrinoless double beta decay of germanium-76, selenium-82 and even xenon-136. The latter is the aim of NEXT, a Spanish project led by the Corpuscular Physics Institute (CSIC-University of Valencia), which is attempting to demonstrate in the Canfranc Underground Laboratory (Huesca) that the neutrino is its own antiparticle.

If neutrinos and antineutrinos are discovered to be the same particle, this would be the first known case of matter that is simultaneously antimatter. Additionally, it would generate an asymmetry that would serve to explain why there is no antimatter in the universe. Majorana neutrinos would have allowed for the creation of more matter than antimatter in the first moments after the Big Bang (for example, in neutrinoless double-beta decay, two electrons are emitted - the creation of matter - but no antineutrinos). After that, all antimatter would have been annihilated along with the majority of matter, releasing energy and leaving behind only the "excess" matter which can be observed in the universe today.